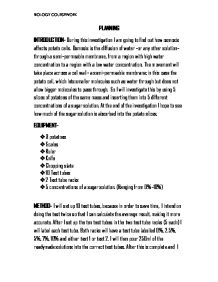 PLANNING INTRODUCTION- During this investigation I am going to find out how osmosis affects potato cells. Osmosis is the diffusion of water -or any other solution- through a semi-permeable membrane, from a region with high water concentration to a region with a low water concentration. The movement will take place across a cell wall- a semi-permeable membrane; in this case the potato cell, which lets smaller molecules such as water through but does not allow bigger molecules to pass through. So I will investigate this by using 5 slices of potatoes of the same mass and inserting them into 5 different concentrations of a sugar solution. At the end of the investigation I hope to see how much of the sugar solution is absorbed into the potato slices. EQUIPMENT- * 3 potatoes * Scales * Ruler * Knife * Chopping slate * 10 Test tubes * 2 Test tube racks * 5 concentrations of a sugar solution. (Ranging from 0%-10%) METHOD- I will set up 10 test tubes, because in order to save time, I intend on doing the test twice so that I can calculate the average result, making it more accurate. After I set up the ten test tubes in the two test tube racks (5 each) I will label each test tube. Both racks will have a test tube labelled 0%, 2.5%, 5%, 7%, 10% and either test 1 or test 2. ...read more.