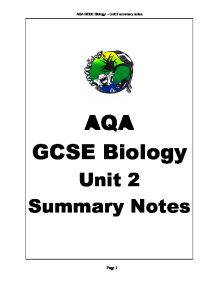 AQA GCSE Biology Unit 2 Summary Notes 12.1 Animal and Plant Cells Cells * Cells are the smallest unit of life. * All living things are made of cells. * Most human cells, like most other animal cells, have the following parts: o nucleus o cytoplasm o cell membrane o mitochondria o ribosomes * Plant cells also have: o cell wall o chloroplasts o permanent vacuole What do these structures do? * Nucleus - controls the activities of the cell. * Cytoplasm - where most of the chemical reactions take place. * Cell membrane - controls the passage of substances in and out of the cell. * Mitochondria - where most energy is released in respiration. * Ribosomes - where protein synthesis occurs. * Cell wall - strengthens plant cells. * Chloroplasts - absorb light energy to make food in plant cells. * Permanent vacuole - filled with cell sap in plant cells. Other facts: * The chemical reactions inside cells are controlled by enzymes. Examples: o Enzymes for respiration are in the mitochondria. o Enzymes for photosynthesis are in the chloroplasts. o Enzymes for protein synthesis are on the ribosomes. * Cells may be specialised to carry out a particular function. Examples: Tissues, organs and systems * A tissue is a group of similar cells carrying out a particular function. * An organ is a group of different tissues carrying out a particular function. * A system is a group of different organs carrying out a particular function. Examples: Cell Tissue Organ Organ System Nerve Nervous Spinal cord Nervous Ciliated Epithelium Trachea Breathing Root hair Epidermal Lateral root Root Palisade Mesophyll Leaf Shoot 12.2 Movement into and out of cells * To get into or out of cells, dissolved substances have to cross the cell membranes. * Solutes = particles in solution eg glucose, sodium ions, chloride ions. * Solvent = liquid in which the particles are dissolved eg water. ...read more.

* The walls of our stomach produce juice. * This juice contains: o A protease enzyme - called pepsin. * This digests proteins into amino acids. o Hydrochloric acid - this kills bacteria in our food. It creates pH3. o Mucus - this protects the wall of our stomach from acid and pepsin. * The wall of our stomach is muscular, and churns our food. * The food remains in our stomach for a few hours. The proteins are digested. * Food leaves our stomach in small squirts into the small intestine. Digestion and absorption in the small intestine The small intestine has 2 main jobs: * To complete the digestion of the food * To absorb the soluble products of digestion into the blood (this is covered in unit 3). Digestion in the small intestine 3 juices are released: 1. Bile * Produced by the liver. * Stored in the gall bladder. * Released into the small intestine. * 2 main things in bile: o Alkali to neutralise the stomach acid o Bile salts which convert large fat droplets to small fat droplets - for a large surface area for the enzymes to act on. THERE ARE NO ENZYMES IN BILE! 2. Pancreatic juice and 3. intestinal juice * Both are released into the small intestine. * Both contain 3 main enzymes: o Amylase to complete the digestion of starch into sugars. o Protease to complete the digestion of proteins into amino acids. o Lipase to break down fats into fatty acids and glycerol. Making use of enzymes * Some microorganisms produce enzymes which pass out of the cells. * These enzymes have many uses in the home and in industry. * In the home, biological detergents may contain protein-digesting and fat-digesting enzymes (proteases and lipases). Advantages Disadvantages These are more efficient at removing stains from clothes. If the clothes are not fully rinsed, protease enzymes may remain in the clothes, which digests protein in the skin. ...read more.

* Unfortunately, the parent who passes on the gene may not know they have the disorder if they have children before the disease is expressed. Cystic fibrosis * A disorder of cell membranes. * It causes thick, sticky mucus to accumulate in the lungs and the digestive system. * This causes: o Lung infections o Problems with breathing o Problems with digestion and absorption. * It is caused by a recessive allele of a gene. * The parents may be carriers of the disorder without actually having the disorder themselves. * It can therefore be passed on by parents, neither of whom has the disorder. * To develop the disease, the allele must be inherited from both parents. Embryo screening * People in families that have had certain genetic disorders can have a genetic test to see if they carry the allele for the disease. * If they do carry the allele, their embryos can be screened to see if it is affected. * They can then decide whether to have an abortion. * This is very controversial. * Also, many people are concerned about this because in the future it may enable people to choose other characteristics in their children. Sex determination * In human body cells, one of the 23 pairs of chromosomes carries the genes which determine sex. * In females the sex chromosomes are the same (XX). * In males the sex chromosomes are different (XY). Parents sex: male X female Parents sex chromosomes: XY X XX Possible chromosomes in gametes: X and Y X X and X At fertilisation: X Y X XX XY X XX XY * There is a 50% possibility of being a girl or a boy. * As a foetus, we all start off with female characteristics. * Presence of Y chromosome causes male development. * Absence of Y chromosome continues female development. * The sex of the baby is determined by the sex chromosome inherited from the father. ?? ?? ?? ?? AQA GCSE Biology - Unit 2 summary notes Page 1 ...read more.

An excellent set of summary notes.

Some of the notes are a little bit basic but are good for getting the framework necessary for a more deeper understanding.

With the carbon cycle, it is important to realise it is not a balanced cycle anymore due to humans burning fossil fuels and releasing carbon dioxide into the atmosphere.

Also, when you discuss diabetes be aware that there are two types of this disease both with different causes ( I have put more detail in the text on this subject).