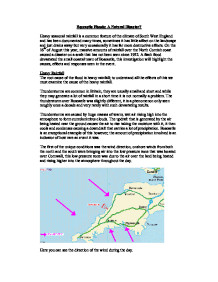 Boscastle Floods; A Natural Disaster? Heavy seasonal rainfall is a common feature of the climate of South West England and has been documented many times, sometimes it has little affect on the landscape and just drains away but very occasionally it has far more destructive effects. On the 16th of August this year, massive amounts of rainfall over the North Cornish coast caused a disaster on a scale that has not been seen since 1952. A flash flood devastated the small coastal town of Boscastle, this investigation will highlight the causes, effects and responses seen in the event. Heavy Rainfall The root cause of the flood is heavy rainfall; to understand all the effects of this we must examine the cause of the heavy rainfall. Thunderstorms are common in Britain, they are usually small and short and while they may generate a lot of rainfall in a short time it is not normally a problem. The thunderstorm over Boscastle was slightly different, it is a phenomenon only seen roughly once a decade and very rarely with such devastating results. Thunderstorms are caused by huge masses of warm, wet air rising high into the atmosphere to form cumulonimbus clouds. The updraft that is generated by the air being heated near the ground causes the air to rise taking the moisture with it, it then cools and condenses causing a downdraft that carries a lot of precipitation. ...read more.

In a similar way to the thin soil and impermeable rock a reduction in vegetation on hillsides decreases lag time because of the reduction in water stores allowing through flow and overland flow rates to increase. It also leads to instability of the soil so mudflows can be more common as the soil reaches saturation point. The solution to this problem would be to stop felling trees and possibly re-plant some of the hillsides. When the water reached the town it arrived very quickly, a 3m wall of water rushing down the bottom of the valley at great speed due to the steepness of the riverbed as well as the valley. When the water reached the town it was funnelled through the narrow streets of the town, this increased the velocity of the water giving it more force to destroy building and move cars. A bridge across the river in the centre of the town clogged up with debris causing a debris dam to form, this causes the water to back up and it can no longer flow in the river bed, this increased the amount of water that was pushed through the streets. The fact that the streets were tarmaced and there was very little open space meant that water could not dissipate into the soil, the only way for the water to get to the sea was through the village. ...read more.

This can be attributed to our sophisticated emergency services. The use of seven emergency helicopters to airlift people out of areas where land forces could not reach them was vital to lowering the number of fatalities. The police, fire, ambulance and army forces were all called to the scene to help with the rescue effort and their combined efforts managed to rescue all the stranded victims. From here it was then down to the less high profile secondary responses. All the rescued and homeless people were taken to a village hall 10 miles south of Boscastle where they were given clean dry cloths, food and a place to stay for the night. This response is just as vital is the primary ones as people would be highly susceptible to thirst, hunger and the cold if they were left to fend for themselves. After the floodwaters subsided it was down to contractors bought in by the government and insurance companies to clean up the area of all the soil and debris deposited by the floodwaters and then begin to rebuild the houses. Due to the event being quite high profile there has been a big response form the British public to help the victims, charities have been set up by companies such as the BBC to help out the victims. The current BBC sum is around 100thousand pounds raised to help out the most needy people. ...read more.