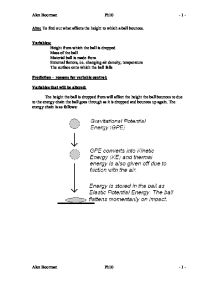 Aim: To find out what affects the height to which a ball bounces.

Height from which the ball is dropped

Mass of the ball

Material ball is made from

The surface onto which the ball falls

Variables that will be altered: 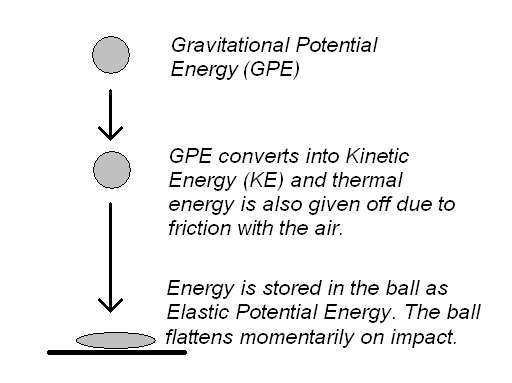 Therefore any change to the height from which the ball starts with affects the height to which it bounces to.

This is correct unless the ball shows signs of reaching terminal velocity. 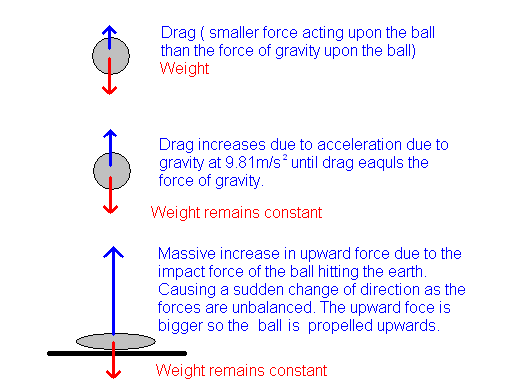 As the ball is accelerating due to gravity, at 9.81m/s2 it is constantly getting faster and therefore the drag force gets bigger and bigger. Drag is a squared function of velocity and therefore as the ball drops drag increases a greater amount each second. Once the drag force equals the gravitational force all forces are equal and acceleration stops. The ball has reached its terminal velocity and cannot fall any faster (unless dropped in a vacuum). 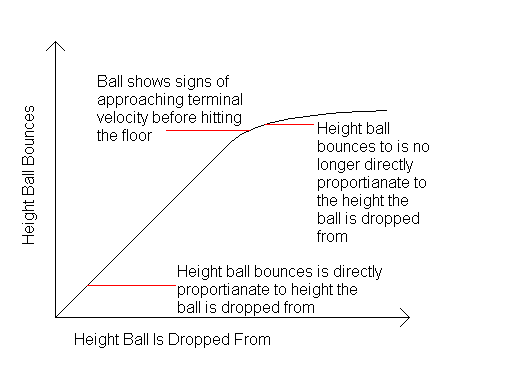 Variables that will be kept constant:

The mass of the ball will affect the height the ball bounces to because it affects the balls starting energy.

Therefore any change to the weight of the ball will affect the energy the ball has initially, which, as previously stated, affects the height to which the ball bounces.

The material ball is made from will affect the ball as if it is smooth then the drag will be significantly less than if it is rough. If the drag is less the ball will fall faster and is less likely to reach its terminal velocity. Also it will affect its bouncing properties.

The surface onto which the ball is dropped will affect the height to which the ball bounces because for any two objects that collide, the properties of both determine the percentage of the kinetic energy either possesses approaching the collision that is conserved subsequent to the collision taking place (Coefficient to restitution) discounting the effects of air resistance. For a falling object the Coefficient to restitution (CR) is equal to the velocity squared as the object is travelling at as it leaves the floor (v22) divided by the velocity squared as it hits the floor (v12):

If dropping a ball in a vacuum all you need to know in order to know how high the ball will bounce to is h1 and CR. CR can be found out by looking at a graph, the gradient, as a percentage of 1 gives the amount of energy conserved and therefore CR can be found without knowing v22 or  v12.

This applies to a ball falling in a vacuum. When a ball drops in air there is air resistance to which the ball loses energy in the form of thermal energy. The energy that the ball hits the floor with is kinetic energy. KE = 1/2mv² where m = mass and v = velocity

As drag is a squared function, proportional to the square of the velocity, it is impossible to calculate the velocity that the ball hits the floor at.

However when the ball is dropped from a relatively low height, drag ≈ 0. This means that we can approximately calculate the amount of energy that the ball conserves as it hits the floor and therefore the height to which it will bounce for any given height in a vacuum. In air considerations have to be taken into account such as air resistance but even so the rough height to which it will bounce to can be predicted before dropping the ball. The difference between the predicted height and the actual height will provide evidence as to how air resistance affects the flight of the ball.

Height will be the variable that we will vary. This is because it is the easiest and quickest variable to alter. The maximum height will have to be less than two meters as that is the maximum height that the equipment allows. I plan to collect at least ten results as this will make the conclusion and graph I am able to draw from the experiment more accurate than if I had less results than ten. This will mean that I will have to have the interval between the different heights from which the ball is dropped from less than 20cm, probably at 10cm. 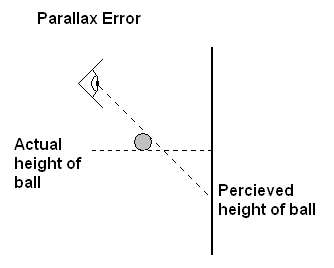 The weight and material of the ball will be kept the same throughout the experiment by using the same ball. This will be a table tennis ball. The ball weighs exactly 2.5g.

Air density will not change enough to affect the flight of the ball seeing as all the results will be collected during a brief period on one day. Temperature will not affect the balls bounce either as the experiment will be conducted at room temperature, thus not allowing the floor to get cold and in doing so alter its affect upon the ball on impact.

The surface onto which the ball is dropped upon will be kept the same. It will be vinyl tiling. The same square of tiling will be used throughout the experiment so that inconsistencies between different floor tiles do not affect results.

This will be repeated five times, possibly more (for accuracy), for each height and the top and bottom results will be discounted. An average will then be taken. This will be called the average of the middle three repeats. This will hopefully discount any anomalies automatically and leave us with three accurate and reliable results. 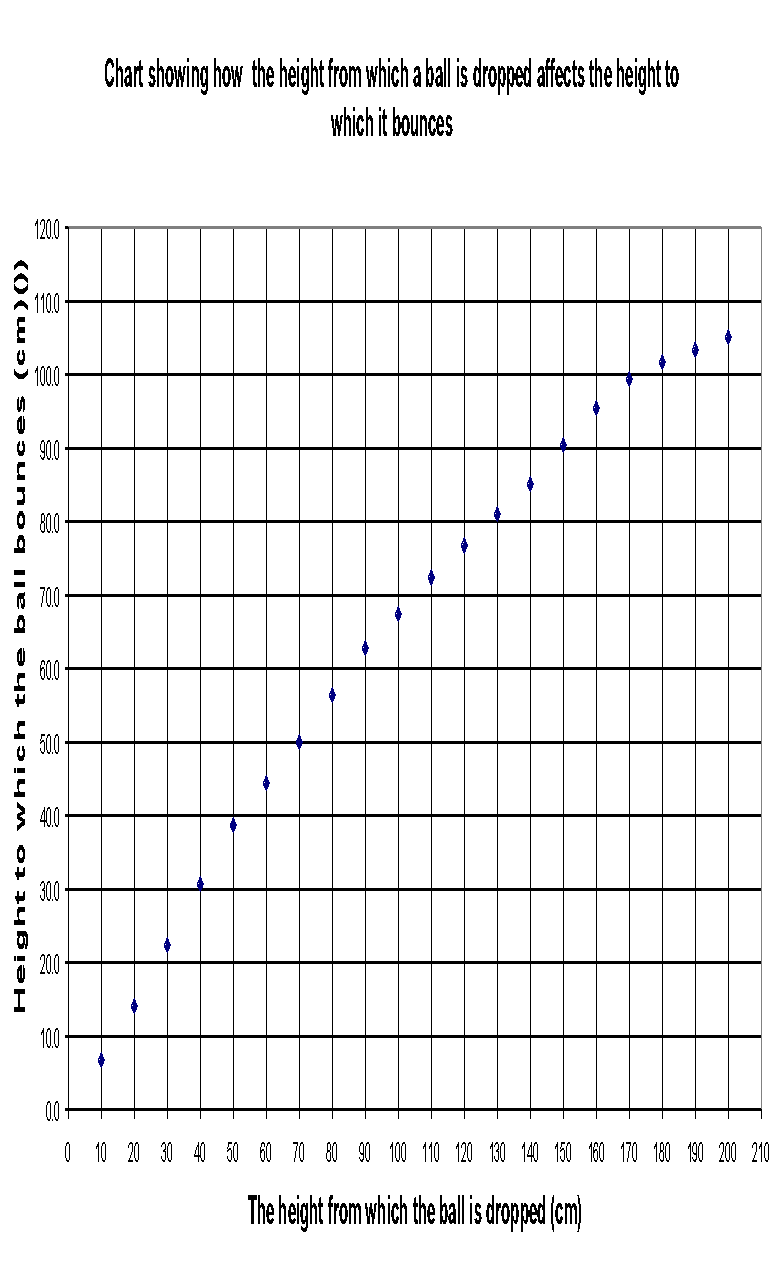 To a wider range of results i.e. use four meter sticks and go right the way up to four meters. This would allow one to find the terminal velocity of the ball.Use a uniform surface to drop the ball ontoUse two people to measure the results; one person to drop the ball and one to measure the height to which it reaches after bouncing. This would eliminate parallax error further. An alternative method would be the measuring person holding a video camera level with the approximate height that the ball reaches after bouncing and videoing the ball reach the top of its arc. This would mean that one could re-examine the height to which it bounced to and find it exactly instead of having to make a split second judgement which is not half as accurate. Measuring the height to which the ball bounced on subsequent bounces would be interesting, seeing if h3 =  h2 × CR. and thus if h3 =  h1 × CR2.

To provide additional relevant evidence I would conduct further work as follows;

I would like to conduct the same experiment in a vacuum. This would provide evidence on how the height from which the ball is dropped from affects the height to which it bounces without air resistance. This would allow the actual coefficient to restitution to be calculated.

The apparatus will be set up as shown: 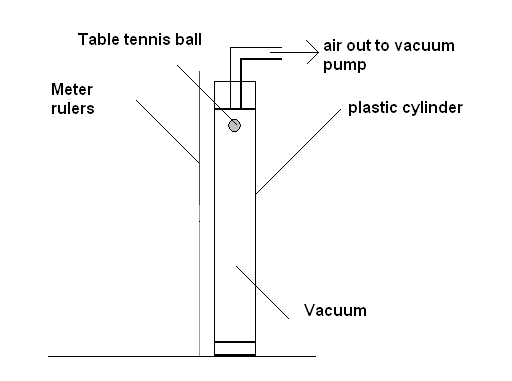 The ball will then be dropped: 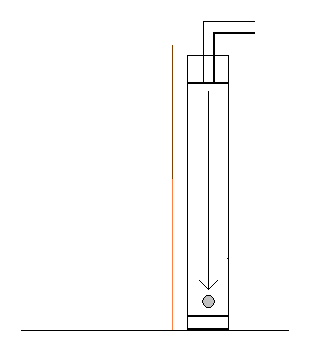 The ball bounces back up: 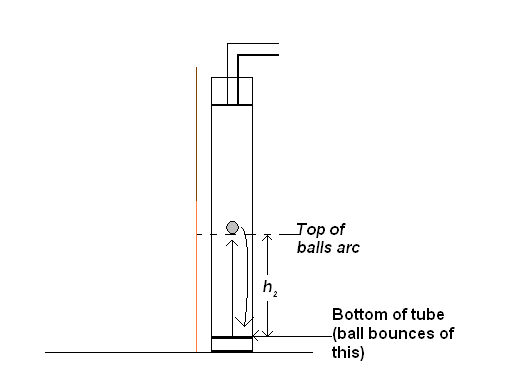 This experiment would provide me with more results that are relevant to the experiment that I have already conducted.