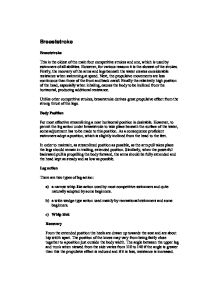 Breaststroke Breaststroke This is the oldest of the main four competitive strokes and one, which is used by swimmers of all abilities. However, for various reasons it is the slowest of the strokes. Firstly, the recovery of the arms and legs beneath the water creates considerable resistance when swimming at speed. Next, the propulsive movements are less continuous than those of the front and back crawl. Finally the relatively high position of the head, especially when inhaling, causes the body to be inclined from the horizontal, producing additional resistance. ...read more.

In order to maintain, as streamlined position as possible, as the arm pull takes place the legs should remain in trailing, extended position. Similarly, when the powerful backward pull is propelling the body forward, the arms should be fully extended and the head kept as steady and as low as possible. Leg action There are two types of leg action: a) a narrow whip-like action used by most competitive swimmers and quite naturally adopted by some beginners. b) a wide wedge-type action used mainly by recreational swimmers and some beginners. ...read more.

At this stage the lower legs are in a near perpendicular position with the feet turned outward and the soles of the feet facing uppermost and just below the water surface Propulsion The feet are driven mainly backwards following a curved pathway as they move towards each other. This is a smooth, powerful and accelerating movement. The drive is first made with the inner sides of the feet and lower legs, using a whip-like action as they thrust vigorously against the water. The broad's paddles of the foot fix on the water, enabling the body to be driven as the legs are extended. ...read more.