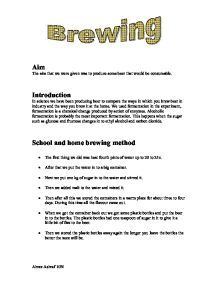 Brewing - The aim that we were given was to produce some beer that would be consumable.

Aim The aim that we were given was to produce some beer that would be consumable. Introduction In science we have been producing beer to compare the ways in which you brew beer in industry and the way you brew it at the home. We used fermentation in the experiment, fermentation is a chemical change produced by action of enzymes. Alcoholic fermentation is probably the most important fermentation. This happens when the sugar such as glucose and fructose changes in to ethyl alcohol and carbon dioxide. School and home brewing method * The first thing we did was heat fourth pints of water up to 20 to 25c. * After that we put the water in to a big container. * Next we put one kg of sugar in to the water and stirred it. * Then we added malt to the water and mixed it. * Then after all this we stored the containers in a warm place for about three to four days. During this time all the flavour came out. * When we got the container back out we got some plastic bottles and put the beer in to the bottles. ...read more.

In home brewing it is not continuous because they are making it for them selves. * In industry the beer volume always stays the same because then they costumers know how much alcohol is put in but in home brewing you can experiment and have different alcohol volumes. Evaluation The good thing about the industry is that they never change they procedure. The taste is always the same. You know you are drinking good beer. It is very easy to sell and the beer is pasteurized so it has longer life. The bad points about the industry are you can not experiment with the alcohol volume. You can not make mistakes and get away with them. The good points about home brewing are you can experiment with the alcohol volume, you are not making the beer for someone else so you can make it to your own liking and you do not get in trouble for making a mistake. The bad points about home brewing are you can not store it for a long time because it is not pasteurized. Some times you may get a weird taste and if you make the alcohol volume to much it can be dangerous. Ahraz Ashraf 10N ...read more.