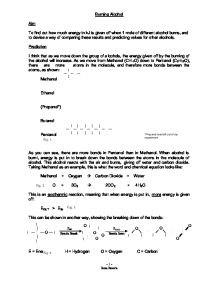 Burning Alcohol Aim To find out how much energy in kJ is given off when 1 mole of different alcohol burns, and to devise a way of comparing these results and predicting values for other alcohols. Prediction I think that as we move down the group of alcohols, the energy given off by the burning of the alcohol will increase. As we move from Methanol (CH4O) down to Pentanol (C5H12O), there are more atoms in the molecule, and therefore more bonds between the atoms, as shown: Methanol Ethanol (Propanol*) Butanol Pentanol As you can see, there are more bonds in Pentanol than in Methanol. When alcohol is burnt, energy is put in to break down the bonds between the atoms in the molecule of alcohol. This alcohol reacts with the air and burns, giving off water and carbon dioxide. Taking Methanol as an example, this is what the word and chemical equation looks like: Methanol + Oxygen --> Carbon Dioxide + Water 2CH4O + 3O2 --> 2CO2 + 4H2O This is an exothermic reaction, meaning that when energy is put in, more energy is given off: EOUT > ...read more.

Propanol I left Propanol out of my original experiment. From my graph, I can extrapolate the approximate value that an experiment with Propanol would give. Reading it off my line, it comes to 1050kJ of energy. I did the experiment with Propanol, and it gave these results: This result is not very close to the result I extrapolated from my graph, but it is quite close to the mid point to the results for Ethanol and Butanol, which is 890.41. This result fits nicely into the trend that my graph shows. Using the same method on my graph, I could predict the value of Hexanol, which Explanation As I predicted, the energy released per mole of alcohol increased with the number of carbon atoms in each molecule of alcohol. This is because there are more bonds in the alcohols with more carbons per molecule than in the alcohols with fewer carbons per molecule (see Fig. 1, page 1). When energy is put in, the bonds are broken. For the bonds to form again, energy is given out, and the amount of energy given out in the reaction is greater than that put in, meaning the reaction is exothermic. ...read more.

However, this can still result in loss of heat. If we take a look at a thermos flask, the liquid inside is surrounded by two sheets of a reflective material. In between these two sheets is a vacuum, meaning it's very hard for heat to pass between the two layers. As further insulation, the two sheets are reflective, so any heat trying to get out, just gets reflected back in, and any heat trying to get out, just gets reflected off the side and doesn't get through. If this experiment could be contained within a larger 'thermos flask', it would prevent a lot of the heat loss. Another way to increase the accuracy of results would be to measure the weight loss to more decimal places. The scales I used only went up to one decimal place. Another two decimal places would increase the accuracy of my results. All in all, the experiment could be improved for accuracy, but at the very least, it does dictate a trend. ?? ?? ?? ?? - 1 - Ross Beavis ...read more.