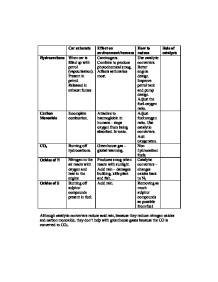 Car exhausts Effect on environment/humans How to reduce Role of catalysts Hydrocarbons When car is filled up with petrol (vapourisation). ...read more.

Catalytic converters - changes oxides back to N2 Oxides of S Burning off sulphur compounds present in fuel. Acid rain. Removing as much sulphur compounds as possible from fuel. Although catalytic converters reduce acid rain, because they reduce nitrogen oxides and carbon monoxide, they don't help with greenhouse gases because the CO is converted to CO2. ...read more.

The response to the question is done adequately as the candidate considers a number of effects on the population and how to improve it, but the essay lacks real scientific depth behind it.

The response to the question is done adequately as the candidate considers a number of effects on the population and how to improve it, but the essay lacks real scientific depth behind it.

The candidate assesses a variety of effects of exhausts on the human population and also provides a variety of ways in which each problem can be improved which is good to see. However, it would have been better to include some depth to the science and include some scientific equations, such as to explain why catalytic converters make combustion more efficient and reduce the affect on the general population. They do include some overall details and conclusion on the main use of catalytic converters at the end but a valid well defined conclusion on the methods and what they reduce would have been better to show greater consideration of the essay research.

The role of catalysts common is left blank, so it looks untidy, and should either be completed or not included at all if is not relevant. The overall essay would have looked better in an essay format rather than tables, because whilst the tables are much easier to read and analyse, this sort of essay calls for a scientific essay long format. Also the use of bullet points to separate each statement. Grammar, spelling and punctuation all okay.