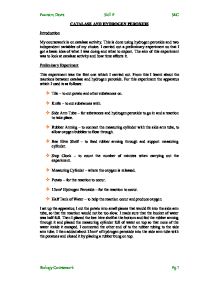 CATALASE AND HYDROGEN PEROXIDE Introduction My coursework is on catalase activity. This is done using hydrogen peroxide and two independent variables of my choice. I carried out a preliminary experiment so that I got a basic idea of what I was doing and what to expect. The aim of this experiment was to look at catalase activity and how time affects it. Preliminary Experiment This experiment was the first one which I carried out. From this I learnt about the reactions between catalase and hydrogen peroxide. For this experiment the apparatus which I used is as follows: * Tile - to cut potato and other substances on. * Knife - to cut substances with. * Side Arm Tube - for substances and hydrogen peroxide to go in and a reaction to take place. * Rubber Arming - to connect the measuring cylinder with the side arm tube, to allow oxygen bubbles to flow through. * Bee Hive Shelf - to feed rubber arming through and support measuring cylinder. * Stop Clock - to count the number of minutes when carrying out the experiment. * Measuring Cylinder - where the oxygen is released. * Potato - for the reaction to occur. * 15cm� Hydrogen Peroxide - for the reaction to occur. * Half Tank of Water - to help the reaction occur and produce oxygen. I set up the apparatus; I cut the potato into small pieces that would fit into the side arm tube, so that the reaction would not be too slow. I made sure that the bucket of water was half full. Then I placed the bee hive shelf at the bottom and fed the rubber arming through it and placed the measuring cylinder full of water on top so that none of the water inside it escaped. I connected the other end of to the rubber tubing to the side arm tube. ...read more.

I also made sure that both times the amount of water uses was the same by measuring it and I also made sure that the temperature of the water was the same both times. The water was always warm. For both times which I carried out these experiments I used the same measurements and procedures. This allowed me to carry everything out in an orderly manner which I knew was correct. The aubergine and heart pieces were cut so that they were roughly the same size. I use the same amount of pieces both times to make sure that my results did not change. If I had not been so careful then my results would have changed and shown an error. This would have meant that I was not carrying out a fair test and that something had gone wrong somewhere. I would have then had to redo the whole experiment. I think that doing the experiment twice was a good idea as I was able to see any changes or errors. However doing the experiment the third time would have been a very good idea as I would have been able to see even the smallest changes and have produced more accurate results. I was not able to do this as I had unfortunately run out of time. Results Below are two results tables; one for the heart and one for the aubergine. In these tables the data is raw. This is to say that these are the exact results taken at the time of conducting the experiment and have not been altered or changed in any way by carrying out calculations. Heart results: Cubed Smashed Time (Minutes) No. of Oxygen Bubbles Produced No. of Oxygen Bubbles Produced 1 50 22 2 53 28 3 43 30 4 33 17 5 21 12 In the table above the results for the smashed heart show that the surface area had increased, however the oxygen production level has fallen. Aubergine results: Cubed Smashed Time (Minutes) ...read more.

It would have been very confusing. Overall View of the Experiment Looking at both of my graphs I am able to see that the curves for my aubergine graph are very similar to each other. They seem to be following a smooth pattern. This shows that although the results are different the arrangement of the data looks the same, which can not be said for the aubergine graph. The aubergine graph has two different curves. This is because the increase in the surface area had a greater impact on the results than the heart did. The temperature of the water was roughly the same for all of the experiments and therefore there should not have been too much of a change in the results. I did some research and found that hot water reacts faster with catalase and therefore produces bubbles at a faster rate. Also the gas dissolves faster, increasing gas and heat energy. I think that my experiment has gone well and that my results have been achieved in a fair way and that they are quite good results. My hypothesis (pg. 14) was also proven correct which means that what I already knew about enzyme reactions has helped me quite a lot. I think that it would have been interesting to investigate further with other fresh meats, cooked vegetables and even fruit. Also it would have been great to see what the outcome would be of using different concentration levels of hydrogen peroxide. This would have been a good opportunity for me to learn more about different rates of reactions on other substances. As well as allowing me to make more hypothesis and obtain different results. As I did not have enough time I was not able to take my research further using the above mentioned substances and methods. Overall I am quite happy with my results, graphs and the whole procedure as it went smoothly even though there were some hazards in the middle. Poonam Davra Skill P S4G Biology Coursework Pg.1 ...read more.