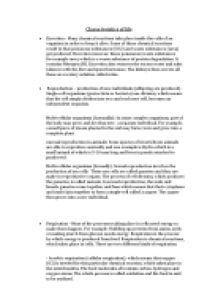 ﻿Characteristics of life 1. Excretion - Many chemical reactions take place inside the cells of an organism in order to keep it alive. Some of these chemical reactions result in that poisonous substances (CO2) and waste substances (urea) get produced. Excretion removes: these poisonous/waste substances for example urea, which is a waste substance of protein degradation. It contains Nitrogen (N). Excretion also removes the excess water and salts taken in with the diet and spent hormones. The kidneys then excrete all these as a watery solution called urine. 1. Reproduction ? production of new individuals (offspring are produced). Single-cell organisms (protoctista or bacteria) use division, which means that the cell simply divides into two and each new cell, becomes an independent organism. Multi-cellular organisms (Asexually): In some complex organisms, part of the body may grow and develop into a separate individual. ...read more.

Respiration is the process by which energy is produced from food. Respiration is chemical reactions, which takes place in cells. There are two different kinds of respiration. - Aerobic respiration (cellular respiration): which means that oxygen (O2) is needed for this particular chemical reaction, which takes place in the mitochondria. The food molecules all contain carbon, hydrogen and oxygen atoms. The whole process is called oxidation and the food is said to be oxidized. The aerobic respiration can be summed up by the equation: C6H12O6 (aq) + 602 (g) -------> 6CO2 (g) + 6H2O (l) +2830 kJ We inhale O2 from the air and exhale CO2. This is called gaseous exchange. Anaerobic respiration: The word anaerobic means ?the absence of oxygen?. In this process, energy is still released from food by breaking it down chemically but the reactions do not use oxygen though they often produce carbon dioxide. 1. Growth ? Most single-celled (unicellular) ...read more.

use readymade organic compounds as their food source. The heterotrophs digest the organic compounds to simpler substances and absorb the products into their body. Examples of heterotrophs are Animals, fungi and some bacteria and protoctista. Animals take in food, in the form of complex organic molecules (carbohydrates, proteins and lipids) and digest them to simpler compounds (glucose and amino acids), which can be absorbed. Fungi also digest their food source, which usually is dead and decaying matter but do so by a process of external digestion. They often release digestive enzymes into their food and absorb the soluble products back into their bodies. They are called saprotrophs. 1. Movement ? Most single-celled creatures and animals move as a whole. Fungi and plants may make movements with parts of their bodies. 1. Responding - is the ability of living organisms to detect changes in their environment and then respond to various stimuli. A stimulus is a change in the external or internal environment of an organism, for example: light, temperature ...read more.