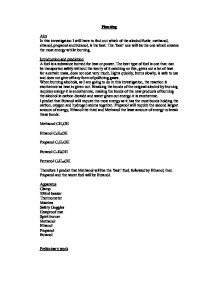 Planning Aim In this investigation I will have to find out which of the alcohol fuels: methanol, ethanol, propanol and butanol, is the best. The 'best' one will be the one which creates the most energy whilst burning. Introduction and prediction A fuel is a substance burned for heat or power. The best type of fuel is one that: can be transported safely without the worry of it catching on fire, gives out a lot of heat for a certain mass, does not cost very much, lights quickly, burns slowly, is safe to use and does not give off any form of polluting gases. When burning alcohols, as I am going to do in this investigation, the reaction is exothermic as heat is given out. Breaking the bonds of the original alcohol by burning requires energy-it is endothermic, making the bonds of the new products of burning the alcohol ie carbon dioxide and water gives out energy-it is exothermic. I predict that Butanol will require the most energy as it has the most bonds holding the carbon, oxygen and hydrogen atoms together. ...read more.

If I changed the beaker the results would differ because one beaker may be thicker than the other so the heat would not be able to reach the water as well. If I used different amount of alcohol each time the results would be different. Techniques: Procedure: If I changed the time that I left the spirit burner burning for then the results would differ because if I left it for longer then the end temperature would be higher and if I shortened the time the end temperature would be lower. Analysing Butanol Pentanol Propanol Ethanol Methanol Weight before (g) 188.06 196.57 180.68 196.58 146.26 Weight after (g) 187.52 196.06 180.30 195.98 145.50 Time taken (mins) 1.19 2.43 1.48 1.24 1.33 Weight difference (g) 0.54 0.51 0.38 0.60 0.76 I believe that the graphs and results that I have collected shows that the more carbon atoms that an alcohol has the more energy it needs to heat the water up to 40 degrees C. A different reason for the results shown above is that the molecular length becomes longer in the larger molecules and consequently increasing the surface area therefore allowing extra energy to be given off. ...read more.

With the extra time would have also been able to do another experiment where I figure out the amount of heat given off during a suitable time period which would help me distinguish the best fuel more easily. I believe that the method I used was a good one and the only faults are the ones listed above. Before lighting the wick I made sure that it was only two centimetres and the spirit burner was five centimetres from the beaker. The results are probably not very reliable and are not good enough to support a firm conclusion because of all the lost heat, the starting temperature of the water not always being the same and the number of experiments that we did were too little. The only anomalous result was from Pentanol the reason I think that happened was because Pentanol has the most bonds and is therefore the alcohol that needs the most energy to break these bonds so that is why it took a long time to heat the water up to 40 degrees C. ...read more.

The response to the experiment is done well. The candidate shows good research behind the experiment and consideration of how the experiment will be set up. The results are presented in an easy to read way with consistent decimal ...

The response to the experiment is done well. The candidate shows good research behind the experiment and consideration of how the experiment will be set up. The results are presented in an easy to read way with consistent decimal places used in the table. The evaluation is good for this level.

The aim of the experiment is outlined succinctly, however, to improve they should say what their definition of energy actually is in this instance. The candidate mentions pentanol in their line-up but then does not mention it in their prediction which is an error as they should not include its chemical formulae unless they are going to use it, as it would give out more energy than butanol. The prediction is explained well, but the candidate should mention which part of the energy they are examining to make it clear to the examiner that they understand it. The candidate does a good preliminary experiment which is good because it shows consideration of results or things that may confound the experiment and accounts for them making the experiment more reliable. Their evaluation is good because they consider things that may go wrong in the experiment.

Spelling, grammar and punctuation good throughout. Their graphs are hard to read so they should have presented them in a different format. The piece is split up into easy to read sections.