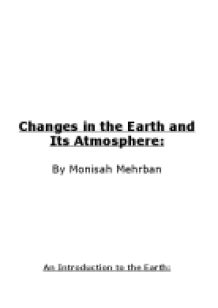 Chemistry- Earth, its structure and atmosphere

ï»¿Changes in the Earth and Its Atmosphere: By Monisah Mehrban An Introduction to the Earth: The Earth is 4.54 billion years old. The Earth's diameter is 12,742 km and the Earth's radius is 6,371 km. What is the Earth like inside? The Earth has 3 main layers, which are the following (starting with the outermost): 1. 2. The Crust is relatively thin and rocky. The crust is the outer layer of the earth and is on top of the mantle. It is between 6 and 48 kilometres thick and includes the continents and the ocean floor. The crust is the solid rock layer upon which we live. There are 2 different types of crust:- continental crust, which carries land and oceanic crust, which carries water. 1. The Mantle is a zone of hot rock in the interior of the Earth, which is located between the outer crust and the molten core. The mantle has the properties of a solid but can flow very slowly. The mantle is the widest section of the Earth. It has a thickness of approximately 2,900 km. The mantle is made up of semi-molten rock called magma. In the upper parts of the mantle the rock is hard, but lower down the rock is soft and beginning to melt. 1. The Core is the innermost part of the Earth. It is made from liquid nickel and iron. There is the inner core and the outer core. The inner core is in the centre and is the hottest part of the Earth. It is solid and made up of iron and nickel with temperatures of up to 5,500°C. ...read more.

These waves spread out from the focus. The waves are felt most strongly at the epicentre, becoming less strong as they travel further away. The most severe damage caused by an earthquake will happen close to the epicentre. Why can't Volcanoes and Earthquakes be predicted? Volcanoes and Earthquakes depend on the interactions of the motions of plates, the pressure of magma in different places far underground etc. All of this is buried so deep in the earth that we can't measure it with sufficient resolution to tell what is really happening, let alone what will happen in the future. The Composition of the Earth's atmosphere Today: The Earth's atmosphere has remained much the same for the past 200 million years. The pie chart shows the proportions of the main gases in the atmosphere. It is clear that the main gas is nitrogen. Oxygen is the next most abundant gas. These two gases are both elements and account for about 99% of the gases in the atmosphere. They are: about 4/5 or 80 percent nitrogen (a relatively unreactive gas) about 1/5 or 20 percent oxygen (the gas that allows plants and animals to respire) The remaining gases, such as carbon dioxide, water vapour and noble gases such as argon, are found in much smaller proportions. What events caused the Earth's Early Atmosphere billions of years ago? Scientists believe that the Earth was formed about 4.5 billion years ago. Its early atmosphere was probably formed from the gases given out by volcanoes. It is believed that there was intense volcanic activity for the first billion years of the Earth's existence. ...read more.

How can fractional distillation be used to provide a source of raw materials? You will recall that about 78 percent of the air is nitrogen and 21 percent is oxygen. These two gases can be separated by fractional distillation of liquid air. Liquefying the air Air is filtered to remove dust, and then cooled in stages until it reaches –200°C. At this temperature it is a liquid. We say that the air has been liquefied. Here's what happens as the air liquefies (note that you do not need to recall the boiling points of the different gases): * water vapour condenses, and is removed using absorbent filters * carbon dioxide freezes at –79ºC, and is removed * oxygen liquefies at –183ºC * nitrogen liquefies at –196ºC. The liquid nitrogen and oxygen are then separated by fractional distillation. Fractional distillation The liquefied air is passed into the bottom of a fractionating column. Just as in the columns used to separate oil fractions, the column is warmer at the bottom than it is at the top. The liquid nitrogen boils at the bottom of the column. Gaseous nitrogen rises to the top, where it is piped off and stored. Liquid oxygen collects at the bottom of the column. The boiling point of argon - the noble gas that forms 0.9 percent of the air - is close to the boiling point of oxygen, so a second fractionating column is often used to separate the argon from the oxygen. ________________ [1]There is a difference between Tectonic Plates and Plate Tectonics. Tectonic plates are the pieces of the Earth's crust and the upper part of the mantle. Whereas Plate tectonics is how the tectonic plates move, part of the Earth's Crust move and the theory of that. ...read more.