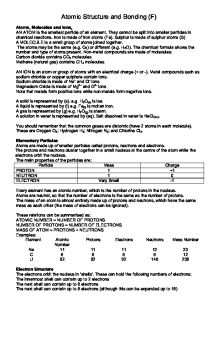 Atomic Structure and Bonding (F) Atoms, Molecules and Ions. AN ATOM is the smallest particle of an element. They cannot be split into smaller particles in chemical reactions. Iron is made of iron atoms (Fe). Sulphur is made of sulphur atoms (S) A MOLECULE is a small group of atoms joined together. The atoms may be the same (e.g. O2) or different (e.g. H2O). The chemical formula shows the number and type of atoms present. Non-metal compounds are made of molecules: Carbon dioxide contains CO2 molecules Methane (natural gas) contains CH4 molecules AN ION is an atom or group of atoms with an electrical charge (+ or -). Metal compounds such as sodium chloride or copper sulphate contain ions. Sodium chloride is made of Na+ and Cl- ions Magnesium Oxide is made of Mg2+ and O2- ions Note that metals form positive ions while non-metals form negative ions. A solid is represented by (s). e.g. H2O(s) is ice. A liquid is represented by (l) e.g. Fe(l) is molten iron. A gas is represented by (g) e.g. H2O(g) is steam. A solution in water is represented by (aq). Salt dissolved in water is NaCl(aq). You should remember that the common gases are diatomic (have 2 atoms in each molecule). These are Oxygen O2; Hydrogen H2; Nitrogen N2; and Chlorine Cl2. Elementary Particles Atoms are made up of smaller particles called protons, neutrons and electrons. The protons and neutrons cluster together in a small nucleus at the centre of the atom while the electrons orbit the nucleus. The main properties of the particles are: Particle Mass Charge PROTON 1 +1 NEUTRON 1 0 ELECTRON Very Small -1 Every element has an atomic number, which is the number of protons in the nucleus. Atoms are neutral, so that the number of electrons is the same as the number of protons. The mass of an atom is almost entirely made up of protons and neutrons, which have the same mass as each other (the mass of electrons can be ignored). ...read more.

Pressure When gases are at high pressure, their particles are closer, and so are more likely to collide and react. Surface Area Solids in powder form will react much more quickly than those in lump form. This is because the powder particles have much more surface area exposed to the other reactant. If a lump is used, only the outside of that lump can react. Summary If we take a reaction such as the reaction between zinc an sulphuric acid: ZINC + SULPHURIC ACID = ZINC SULPHATE + HYDROGEN The rate of this reaction can be measured by seeing how much hydrogen gas is given off in one minute. This rate can be increased by: 1) Raising the temperature of the reaction. 2) Using more concentrated sulphuric acid. 3) Using powdered zinc rather than lumps. 4) Adding some copper, which acts as a catalyst. The rate of a reaction can be measured and followed on a graph, e.g. Curve A represents a reaction between powdered zinc and sulphuric acid, while curve B represents a reaction between lumps of zinc and the same amount of sulphuric acid. You should note: a) That a steeper curve (A) represents a faster reaction. b) That the curves start steeply, but then level off. This is because the concentration of the acid is high at the start of the reaction, but gets less as the acid is used up and eventually stops. c) That the amount of gas made by the end of the reaction is the same as long as the amounts of reactants are the same. The rate of a reaction does not affect the final amount of product made. Measuring the Rate of a Reaction The rate of a reaction is defined as Rate = Amount of Reactant Used up or Amount of Product Formed Time A reaction can be followed in various ways, e.g. by seeing how much mass is lost in a certain time, or how much gas is produced in a certain time. ...read more.

Sodium hydroxide + sulphuric acid = sodium sulphate + water Ammonia reacts with acids to give ammonium salts such as ammonium nitrate. These are valuable fertilisers 2) Acids react with metals (except for the unreactive metals such as copper, silver and gold) ACID + METAL = SALT + HYDROGEN e.g. Zinc + sulphuric acid = zinc sulphate + hydrogen Neutralisation To find out the neutralisation point for an acid-alkali reaction, various techniques can be used: 1) When Universal Indicator becomes pale green (pH7) 2) When a pH meter indicates that the pH is 7 Therefore when an acid reacts with an alkali, H+ ions from the acid react with OH- ions from the alkali to make water H+ + OH- = H2O Making salts Method 1. Used to make sodium, potassium & ammonium salts. An acid is to react with an alkali. 1) The alkali is measured out using a pipette, indicator is added, and enough acid is added from a burette to just change the colour of the indicator. 2) The volumes of acid and alkali used are noted, and the experiment is repeated using the same volumes, but no indicator. 3) The solution is evaporated to leave the salt. Method 2 Where an acid is reacted with an insoluble substance (base or metal). 1) Some acid is measured into a beaker and warmed. 2) The insoluble base is added a little at a time until no more will dissolve. 3) The solution is filtered to remove any unreacted material, and the filtrate is left to evaporate, leaving the pure salt. Method 3. Used to make an insoluble salt 1) We find solutions which contain the two halves of the salt. 2) These solutions are mixed and form a solid precipitate, which can then be filtered off. 3) The precipitate is washed and dried e.g. to make silver , we mix solutions of silver nitrate and sodium chloride solutions. Silver Nitrate + Sodium Chloride = Silver Chloride + Sodium Nitrate This method can also be used for purifying water. A chemical is added to the impure water to precipitate out the impurities. ...read more.

This is a fantastic, well detailed, clearly explained set of notes covering a wide range of topics. They are clearly labelled with useful subheadings and include excellent examples to help with understanding