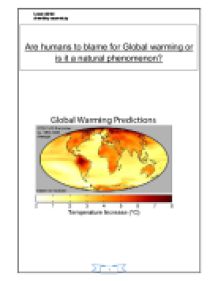 Are humans to blame for Global warming or is it a natural phenomenon?

Contents page 1. Introduction (page 3) 2. Scientific background (page 4-5) 3. Arguments for global warming being caused by humanity (page 6) 4. Arguments for global warming being caused natural phenomenon (page 7) 5. Conclusion (page 8) 6. Bibliography (page 9) Introduction The question I have chosen to answer is 'Are humans to blame for Global warming or is it a natural phenomenon?' I have chosen this question because this question raises numerous arguments that need to be addressed and solved. Global warming is a matter that is featured in my everyday life such as newspapers, books, news, etc. the main issue is the debate on whether global warming is man-made or the cause of a natural phenomenon such as the sunspot theory. In this case study I will be assessing and evaluating the evidence which I have collected in order for me to find out the true cause of the worldwide epidemic that is global warming. Research that I have done shows that global temperatures are trending upwards. So can assume that global warming is in effect however we have yet to find a definite decision as to who is the cause of global warming. Many people may argue that global warming is an idea theorised by 'tree-huggers' but reports have shown evidence that may shed some light on what global-warming actually is and the so-called 'greenhouse effect' The illustration above shows the temperatures changes in the world. The areas that go to the right and are going to the darker red displays the increase in temperature in degrees and to the left shows the decrease in your temperature in blue. ...read more.

For example to cultivate rice, hot climates and good soil would be needed. This is why rice production is mainly done in Asia and parts of Africa and cannot be profitable to be grown large-scale in the UK in a greenhouse. Due to global-warming, the temperature would rise. This could lead to the soil drying out and a lot of water lost. Without this water, the plant crops would die and without the plants roots to hold the soil together, it could lead to soil erosion from high winds and the gradual desertification of that area such as Burkino Faso which is located in the Sahel region. Ocean acidification When carbon dioxide is produced, not all of it goes up into the atmosphere. Some of it is absorbed by plants and used when they photosynthesise and some of it dissolves in the oceans, rivers and lakes. An increased production of co2 would mean that more carbon dioxide is being dissolved into the ocean which would lead to the ocean acidification. This acidification is due to carbonic acid being produced when carbon dioxide dissolves in the water. As a lot of thermal energy is absorbed by the oceans, the temperature of them would rise. This rise in temperature and acidity could cause the extinction of many of the marine wild-life that inhabits the sea. Mass widespread extinction of species If an animal cannot adapt to a change in their environment quick enough, they would die out and could become extinct. ...read more.

This gas enters the atmosphere and adds to the greenhouse effect. Conclusion I agree with global-warming may be due to human activities because it is apparent as we are producing more and more carbon dioxide every day due to things that may make our lives easier and more luxurious but is not cannot meet the needs of tomorrow and is not sustainable. We can see that the total levels of co2 emissions emitted by humans and the total amount of atmospheric co2 levels are linked and have a correlation. I also think that global warming may also be having an involvement with the volcanic activity over time. However I think that it is because of human activities like deforestation that affect the amount of carbon dioxide that goes up into the atmosphere naturally through processes like respiration that can be locked away. In conclusion I believe that natural phenomenon are a predominant cause of global warming because research by scientists indicate that changes in climate have been occurring well before the dawn of humanity. Since the industrial revolution massive amounts of co2 have been created and have risen into the atmosphere and companies like McDonalds which clear large amounts of land so that they can use it for cattle ranching. This would release the carbon dioxide that has been stored in the trees and less carbon dioxide would be able to be stored by the declined population of trees. However I believe that since the answer to this question can never be fully resolved. More focus should be given to try and combat global-warming and people should be made more environmentally aware. ...read more.