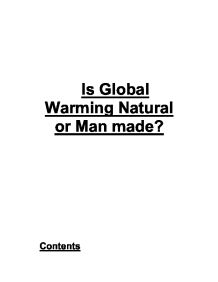 Is Global warming Natural or Man-made?

Is Global Warming Natural or Man made? Contents Introduction Page 3 Greenhouse effect Page 3 Manmade and Natural Causes - including Science Page 4 Chlorofluorocarbons Page 5 Evidence Page 5 Evaluation Page 6 Bibliography Page 7 Introduction For my GCSE case study I have chosen to study a scientific question in detail. The question is 'global warming natural or Man made?". The reason for me choosing this question is because this has been an increasing concern and a threat to human life on earth. For my case study I will research both sides of the case, comment in detail about the scientific theory of global warming and also justify my conclusion with strong evidence. To make my case study reliable I will be using latest articles, information and books. Old sources will have been out of data because global warming is a changing situation. This topic will have to be the most interesting questions nowadays. Is the climate changing and if it is whether the reasons are man-made or natural, or even both. In the recent years government and research have assured us that climate change is due to man made emissions of 'greenhouse gases'. This has led many of us to change our luxury lifestyles down a notch to a much greener and eco friendly lifestyle. ...read more.

If we reduce deforestation and conserve fossil fuels we will have more chance of infrared radiation going out of the atmosphere. We cannot prevent the atmospheric layer from absorbing in visible and light radiation. Below I have shown a picture showing man made contribution towards global warming: Chlorofluorocarbons, I personally think that this causes an awful lot of damage. The CFC's trap heat and also make the protective ozone layer thin. This will accelerate the process of climate change. According to CFCs absorb 20,000 times as much heat; however as however international decisions have been taken to decrease CFC emissions and help stabilize CFC levels in the air. We need radiation from the sun. The Greenhouse effect is definitely real because of the fact that it keeps the Earth warm, whereas if there was no greenhouse effect it will be 30 degrees colder, which will be extremely cold for the existing life on earth. Evidence The evidence for scientists blaming human activities for global warming has been provided by supercomputers. These are computer climate models, based on different amounts of carbon dioxide in the atmosphere; produce the same changes as have been observed in the real world. These models show short to medium impacts on the increase of global warming. ...read more.

Politicians on the other hand just provide a cause to support man made global warming. It is not the job of politicians to sort the fact and opinion about global warming. So what is the answer is global warming man made or natural? Above I have my scientific theories of various manmade and natural contributions to global warming. I also gathered information from sources and noted down some strong evidences. I am now going to sum everything up and give my final opinion. Evaluation Many natural activities have been scrutinized in the past by a minority of scientists; many others including the (IPCC) are blaming humans for the cause of global warming. Many people have been affected by global warming, for example hurricanes are cause by the warm water from the seas. Many oceans and seas absorb a lot of radiation, which makes the water warm. I do agree that this has been a problem with the natural activities, but humans should also be guilty for this. If there had been less fossil fuels burned, less deforestation and less CFC's, we could have kept the edge of the atmosphere very thin. If we did have, we would have been able to reflect more infrared radiation out of our atmosphere. We have to bear in mind that natural activities have been happening since earth was created, there could have not been a sudden plunge in warming in the world. ...read more.