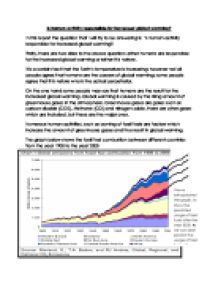 The USA is accountable for 23% of the world's carbon dioxide emissions and therefore the country is responsible for major change to the atmosphere and the increased global warming; additionally we can see the millions of carbon dioxide that is pumped yearly, into the Earth's atmosphere. As I explained before how carbon dioxide affects global warming, we can comprehend, just how effective that human activity is on destroying the environment and atmosphere. Cars have similar effects as that of burning fossil fuels; the fact that humans are emitting millions of tons of carbon dioxide through the use of cars further depicts just how exponentially the Earth's atmosphere is getting destroyed. Nitrogen oxide is another well known gas that affects the atmosphere; it is said that oxides of nitrogen have three hundred times more heat-trapping capacity per unit of volume than carbon dioxide. Nitrogen oxides are released every time we apply fertilizer to soil. Even though the use of CFCs, such as in refrigerators, was banned long ago, the ramifications are still seen today; the reason for this is because once CFCs are released into the atmosphere, they begin a chain reaction and therefore the CFCs within the atmosphere and ozone layer take a long time to be removed. CFCs are many times more potent than carbon dioxide and even though (as I said before) they were banned long time ago, they still continue to contribute to global warming because they destroy the ozone layer; the ...read more.

Furthermore, methane is a byproduct of natural biological processes in mammals. * What's more natural solar activity is a contribution to global warming. The emissions of heat from the sun fluctuate over short and long term periods. Moreover, sunspots (Changes in the Earth's solar radiation levels) and solar flares have the ability to increase the amount of energy reaching the Earth over a wide spectrum, including UV light. * Evaporation of ocean water has shown to release numerous chemicals that either directly or indirectly contributes to global warming. It is a fact that the oceans contain more carbon dioxide than the atmosphere and release of carbon dioxide is common, especially in warmer waters. * Volcanic activity is probably the largest producer of naturally occurring greenhouse gas emissions. There is proof that volcanic eruption has released terrific amounts of carbon dioxide. Methane tends to be also released from volcanoes, but more intensely during warmer seasons. Recently scientists have found that the Earth goes through a temperature cycle and usually his climate change usually lasts about 40,000 years. The graph shows how global temperatures have changed over the past 160,000 years: This is evidence that naturally there have been changes in Earth's temperature and we just happen to be in the age where nature has warmed up the Earth. The graph shows some inconsistences and anomalies such as the data on temperature about 130,000 years ago and about 15,000 years ago ...read more.