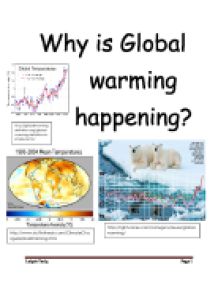 My case study is about global warming and why it happens.

These gases join with water and produce acid rain. Acid rain is measured by PH scale and acid rain. Acid rain destroys many crop and livestock. "The effects, of course, were most severe in Iceland; ultimately, more than 75 percent of Iceland?s livestock and 25 percent of its human population died from famine or the toxic impact of the Laki eruption clouds." http://www.scientificamerican.com/article.cfm?id=how-do-volcanoes-affect-w (6/06/2011, 10:24pm). Volcano eruptions produce sulfur gases that are in the stratosphere. The sulfur gases once they combine with water they produce sulfuric acid the tiny droplet are light in colour. The sulfur acid falls on the earth and the stratosphere dries and sulfur droplets causes the earth to get cooled up. Evidence 2 Global warming is effected by Earth's soil produce carbon dioxide (co2).the soil releases carbon dioxide by respiration. The carbon dioxide comes from the ground into the atmosphere. "The researchers found that soil respiration had increased by about 0.1 percent per year between 1989 and 2008, the span when soil measurement techniques had become standardized." http://www.scientificamerican.com/article.cfm?id=soils-emit-carbon-dioxide The soil produce billions tons of carbon dioxide in the atmosphere every year. ...read more.

"Deforestation is responsible for about 20% of global carbon emissions, more than from all the cars, boats and planes in the world." http://www.time.com/time/magazine/article/0,9171,1642887,00.html Evidence 3 When burning fossil fuel carbon dioxide is produce and goes into the atmosphere. "an average of 496 billion metric tons" "http://www.scientificamerican.com/article.cfm?id=guaranteed-global-warming-with-existing-fossil-fuel-infrastructure" Conclusion My case study was about global warming. I wrote about natural and manmade effects of global warming. The natural effect of global warming is that volcanoes produce carbon dioxide "produce about 110 million tons of CO2 each year" and sulphur "sulfur gases that are in the stratosphere". I believe this is the case because the volcano releases a lot of gases in the air and there is after effects however deforestation could be the case because it causes the earth to heat up and on the image on page 8 it show the about of tons. I believe that the carbon cycle is the case because in the image it shows the different ways natural gases releases however carbon footprint is the case because human different actives releases gases and affects the carbon cycle. I believe that the Methane emissions is the case because methane comes from cows stomachs and from rice paddies however the pollutants page 9 are the case because the gases are stronger. ...read more.