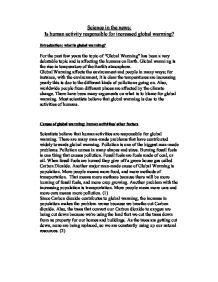 Science in the news:

Introduction: what is global warming?

For the past few years the topic of “Global Warming” has been a very debatable topic and is affecting the humans on Earth. Global warming is the rise in temperature of the Earth's atmosphere.
Global Warming affects the environment and people in many ways; for instance, with the environment, it is clear the temperatures are increasing yearly this is due to the different kinds of pollutions going on. Also, worldwide people from different places are affected by the climate change. There have been many arguments on what is to blame for global warming. Most scientists believe that global warming is due to the activities of humans.

Scientists believe that human activities are responsible for global warming. There are many man-made problems that have contributed widely towards global warming. Pollution is one of the biggest man-made problems. Pollution comes in many shapes and sizes. Burning fossil fuels is one thing that causes pollution. Fossil fuels are fuels made of coal, or oil. When fossil fuels are burned they give off a green house gas called Carbon Dioxide. Another major man-made cause of Global Warming is population. More people means more food, and more methods of transportation.  That means more methane because there will be more burning of fossil fuels, and more crop growing. Another problem with the increasing population is transportation. More people mean more cars and more cars means more pollution. (1)
Since Carbon dioxide contributes to global warming, the increase in population makes the problem worse because we breathe out Carbon dioxide. Also, the trees that convert our Carbon dioxide to oxygen are being cut down because we're using the land that we cut the trees down from as property for our homes and buildings. As the trees are getting cut down, none are being replaced, so we are constantly using up our natural resources. (2)

On the other side, some scientists don’t agree that humans are to blame for global warming but instead, they believe that natural resources are to blame.  Natural causes of global warming is the volcanic eruptions on Earth that cause temperatures to decrease, because the smoke and gases given off can act like an umbrella shade and prevent sunlight from passing through the atmosphere.  In addition any slight change in the earth's orbit could cause the earth to move closer or farther away from the sun.  This could completely change temperatures, because the earth would be closer or farther away from its source of heat. (3)

Global warming can be prevented by just diving less often, replacing light bulbs with energy sufficient ones, unplugging electronic appliances when they’re not in use because they still use up lots of energy, use your own shopping bags when shopping and simply recycling empty bottles and paper. (4)

This graph shows the rapid increase of carbon dioxide over the years from 1950-2010. You can notice a trend from the graph that the carbon dioxide emissions had always been greater than the year before. This was due to the population enhancement and the productions of more complex electronics. ( 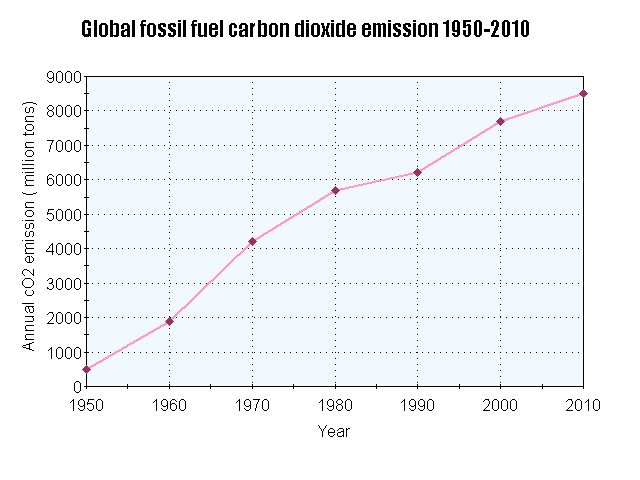