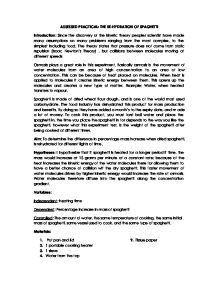 THE RE-HYDRATION OF SPAGHETTI Lab Report

ASSESSED PRACTICAL: THE RE-HYDRATION OF SPAGHETTI Introduction: Since the discovery of the kinetic theory people/ scientist have made many assumptions on many problems ranging from the most complex, to the simplest including food. The theory states that pressure does not come from static repulsion (Isaac Newton's Theory) , but collisions between molecules moving at different speeds Osmosis plays a great role in this experiment. Basically osmosis is the movement of water molecules from an area of high concentration to an area of low concentration. This can be because of heat placed on molecules. When heat is applied to molecules it creates kinetic energy between them. This opens up the molecules and creates a new type of matter. Example: Water, when heated transfers to vapour. Spaghetti is made of dried wheat flour dough, and is one of the world most used carbohydrate. The food industry has dehydrated this product for mass production and benefits. By doing so they have added a month's to the expiry date, and made a lot of money. To cook this product, you must forst boil water and place the spaghetti in, the time you place the spaghetti in for depends to the way you like the spaghetti, however what this experiment test, is the weight of the spaghetti after being cooked at different times. ...read more.

9. Shake the sieve so all access water s drained. 10. Place a tissue paper on the electronic weight scale. (Make sure you weight the tissue before measuring the spaghetti, some brands of tissue paper are heavy.) 11. Carefully weigh the dried and boiled spaghetti sample on an electronic weight scale. 12. Record all of your data into the example table as shown in the second step. 13. Repeat steps through 3 - 11 and carefully record your data with the most precise accuracy. Data Data Table 1: Cooking Time, Mass Difference and Percentage Increase Time (Min) Initial Mass (g) Final Mass (g) Difference (g) Percentage Increase (%) 4 50.00 87.50 37.50 75 5 50.00 97.35 47.35 95 6 50.00 108.73 58.73 117 7 50.00 119.36 69.36 138.72 Observation: During our tests, I noticed that the spaghetti, as time past , began to loosen up for its crusty form and get thicker in shape. I also noticed white flour coming out of the spaghetti. White flour was there before the heat was applied but, the water eliminated the flour coating and inserted the spaghetti, enlarging it in size thickness. Another thin I realized was that when closing the lid of the pot, the spaghetti cooks more, therefore adding another variable to the experiment. ...read more.

spaghetti stays in the pot of water the heavier it gets due to the process of osmosis, and the absorption qualities of the spaghetti. By stating so, we can also conclude from the data collected, that there is a limit to the absorption point of the spaghetti. We can see this in the slight curve shown in the graph. Evaluation: Mistakes: * By cooling down the spaghetti, by pouring water on it, might affect the absorption because an extra amount might have been absorbed. * The temperature of the water may not have been the exact same for each of the 5 different tests, therefore if could have affected the percentage mass increase of the re-hydrated spaghetti for each set of tests. Improvements: * Before placing the spaghetti on the scale dry it, for a precise amount of time, so we wouldn't have to measure the weight of the tissue paper. * Using a thermometer where you can maintain your fixed temperature or use a cooker which has a fixed temperature at which you can set it at. Extensions: * Change the amount of water used to boil the spaghetti. * Boil spaghetti at different temperatures to determine whether or not it will affect the percentage mass. * Boil different amounts of spaghetti at a time and work out their percentage mass increase after a set amount of time. ?? ?? ?? ?? ...read more.