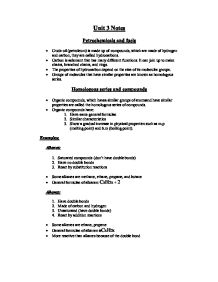 Unit 3 Notes Petrochemicals and fuels * Crude oil (petroleum) is made up of compounds, which are made of hydrogen and carbon, they are called hydrocarbons. * Carbon is aelement that has many different functions. It can join up to make chains, branched chains, and rings. * The properties of hydrocarbon depend on the size of its molecules groups. * Groups of molecules that have similar properties are known as homologous series. Homologous series and compounds * Organic compounds, which havea similar groups of atomsand have similar properties are called the homologous series of compounds. * Organic compounds have: 1. Have same general formulae 2. Similar characteristics 3. Show a gradual increase in physical properties such as m.p (melting point) and b.m (boiling point). Examples: Alkanes: 1. Saturated compounds (don't have double bonds) 2. Have no double bonds 3. React by substitution reactions * Some alkanes are methane, ethane, propane, and butane * General formulae of alkanes: CxH2x + 2 Alkenes: 1. Have double bonds 2. Made of carbon and hydrogen 3. Unsaturated (have double bonds) 4. React by addition reactions * Some alkenes are ethane, propene * General formulae of alkenes isCxH2x * More reactive than alkanes because of the double bond Refining oil * In order to be useful crude oil has to be refined Refining involves 3 stages: 1. ...read more.

? polymer Substitution Polymerization: * Substitution polymerization is also called condensation reaction * Usually 2 products * Monomer + monomer + monomer + .....?polymer + water Alkanes and Alkenes * Alkanes and alkenes are two important groups of organic molecules. * They are hydrocarbons,which means that their molecules contains of carbon and hydrocarbon only. * Alkanes are saturated compounds because they only have one bond * Alkenes are unsaturated compounds because they have a double bond * Alkenes are more reactive than alkanes because of their double bond Some Alkanes and alkenes: 1. Methane - CH4 2. Ethane - C2H6 3. Propane - C3H8 4. Butane - C4H10 5. Ethane - C2H4 6. Propene - C3H6 7. Butene - C4H8 8. Pentene - C5H10 How do you find out if it is an alkane or alkene? Add bromine water and if it turns colorless then it is a alkene, but if it is orange than it is a alkane. Plastics Definition: A plastic can be molded or shaped into anything * Plastic is a macromolecule which is a big molecules which is made from lots of small bits. Monomer + monomer + monomer+ ....?polymer Examples: Bakelite, Perspex, polythene, and polystyrene etc... In like examples: sun glasses, plastic buckets, rubrics cube etc... ...read more.

Save energy 2. Save resources 3. Save money 4. Produce less waist Fire For a fire to bun there must be * A fuel * Source of energy * Oxygen The fire triangle is a triangle with the three things above in all sides. Classes of fire: Class A: ordinary materials, paper, wood, cloth Class B: flammable liquids such as cooking oil, petrol Class C: flammable gases such as natural gases Class D: metals How to prevent fires or to kill them * For a forest fire you can put firebreaks. A firebreak is a gap in the forest like a long road where there is no fuel for the fire. A fuel can be wood, coal, petrol etc... * A powder fire extinguisher. This is a extinguisher that covers the fire with some sort of powder and ends up killing it. * Fire blanket to cover the fire * Liquid carbon dioxide extinguisher. When this is released it becomes a gas and goes on the fire. Then the fire dies. * Foam fire extinguisher. It covers the fire when you spray it. * A stone circle * Fire resistant material Notes * Crude oil is a mixture of hydrocarbons * Carbon atoms are really important because they have an ability to join up chains, branched chains, and rings. * Bromine solution is brown and need to know for test ...read more.