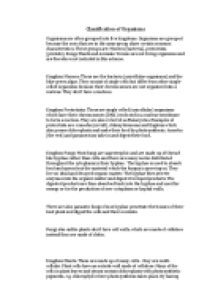 ﻿Classification of Organisms Organisms are often grouped into five kingdoms. Organisms are grouped because the ones that are in the same group share certain common characteristics. These groups are: Monera (bacteria), protoctista (protists), Fungi, Plants and Animals. Viruses are not living organisms and are therefore not included in this scheme. Kingdom Monera: These are the bacteria (unicellular organisms) and the blue-green algae. They consist of single cells but differ from other single-celled organisms because their chromosomes are not organized into a nucleus. They don?t have a nucleus. Kingdom Protoctista: These are single celled (unicellular) organisms which have their chromosomes (DNA) enclosed in a nuclear membrane to form a nucleus. They are also referred as Eukaryotes. ...read more.

They live on dead and decayed organic matter. The hyphae then secrete enzymes into the organic matter and digest it to liquid products. The digested products are then absorbed back into the hyphae and used for energy or for the production of new cytoplasm or hyphal walls. There are also parasitic fungi whose hyphae penetrate the tissues of their host plant and digest the cells and their contents. Fungi also unlike plants don?t have cell walls, which are made of cellulose instead they are made of chitin. Kingdom Plants: These are made up of many cells ? they are multi-cellular. ...read more.

Binomial system Binomial means ?two names?, the first name gives the genus and the second gives the species ex: Homo sapiens. The name of the genus (generic name) is always given a capital letter and the name of the species (specific name) always starts with a small letter. Categorizing organisms (scientific classification) You categorize all the organisms by using the scientific classification and the different categories are: Kingdom, phylym, class, order, family, genus and species. The longer you come down the list the fewer amounts of organisms there are. For example if there where 10 organisms at the start in the category Kingdom which by so belongs to the same kingdom then there will maybe only be one at the category species because there is only one organism who belong to that particular species. ...read more.