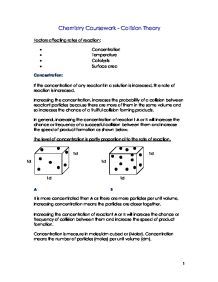 5. I will start timing from the moment the two solutions meet. 6. The cross I put on the piece of paper will be viewed from above the conical flask. 7. I will stop timing when the cross disappears from view. 8. Steps 1-7 were then repeated to develop an average. Diagram of experiment Apparatus list: One 250cmcubed conical flask Two 250cmcubed beakers Stock solution of one molar HCL Stock solution of 0.5 molar NA2 S2O3 (SODIUM THIOSULPHATE) One stop clock One thermometer (100degrees) Two 100cmcubed measuring cylinders One A4 piece of paper One labelling pen Safety: In this experiment I will be using hydrochloric acid which is extremely corrosive and can cause serious damage to skin and eyes; as a precaution lab coats and safety goggles will be worn for the duration of the investigation. It is particularly important that I wear goggles when observing the cross from above, as this is where damaging contact is most likely to occur. Furthermore, sulphur dioxide will be formed during this experiment. This may cause ventilation problems, and can bring on asthma attacks so it is crucial that the experiments will be carried out in a well ventilated room with plenty of wide open windows. Fair test There are a number of factors that have to remain constant throughout the duration of the experiment. This is to ensure a fair test will be performed and none of the conditions below alter the results in any way. 1. Viewing angles 2. ...read more.

2. Moreover, the measuring of acid concentrations etc would not have been perfect, because not very sophisticated instrument were used. For example, the measuring cylinder measures only to 1 decimal place, so it would be difficult to be perfectly accurate. 3. In addition you cannot expect the temperature to have remained constant throughout the experiment, especially as there was so much movement in and out of the room that would have caused drafts, which would have lead to slight changes in temperature. In an attempt to overcome these problems, we could have used a number of ideas. For the first set of problems we could have substituted the human element in the test for an electronic circuit with a light dependant resistor. This would have allowed current to pass the moment the light had been obscured by the sulphur, and the circuit could have been made to stop a timer. In answer to the second batch of difficulties concerning the accuracy of the instruments themselves, we could have changed the measuring cylinder for a burette, which measures to 2 decimal points. To solve the fluctuating temperature problems we could have blocked the windows tight and blocked any cracks allowing air access. Movement in the room would have been absolutely minimal. Overall to gain more accuracy, we could have tested a wider range of concentrations, for example we could have gone right down to 0.001, 0.002, etc, but this would have been far to time consuming. Finally, we could have used a different method all together. One method is to collect the sulphur dioxide gas given off in the experiment in a gas syringe, and measure the volume periodically, every minute. ?? ?? ?? ?? 1 ...read more.