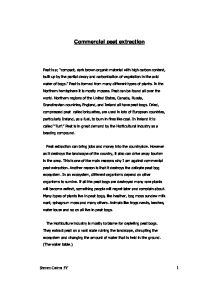 Commercial peat extraction Peat is a; "compact, dark brown organic material with high carbon content, built up by the partial decay and carbonization of vegetation in the acid water of bogs." Peat is formed from many different types of plants. In the Northern hemisphere it is mostly mosses. Peat can be found all over the world. Northern regions of the United States, Canada, Russia, Scandinavian countries, England, and Ireland all have peat bogs. Dried, compressed peat called briquettes, are used in lots of European countries, particularly Ireland, as a fuel, to burn in fires like coal. In Ireland it is called "Turf." Peat is in great demand by the Horticultural industry as a beading compound. Peat extraction can bring jobs and money into the countryside. However as it destroys the landscape of the country, it also can drive away tourism in the area. This is one of the main reasons why I am against commercial peat extraction. ...read more.

it holds and releases water, retains air spaces, is reasonable sterile, toxin free, has a low PH value, different textures and encourages fine roots to grow. There are lots of peat alternatives on the market. Different types of compost and coir (a waste product from the coconut industry) are the most common, although they are expensive due to low demand. If people used more alternative bedding sources, the prices will fall. The Horticulture industry would argue that if commercial peat extraction stopped, it would have extremely harmful effects on economy. One thousand people are employed in peat extraction in the Uk. Thirty thousand jobs are linked to the packing and transport of peat, �500 million are linked to peat sales. If peat extraction is stopped the One thousand people who are employed in peat extraction could collect and produce peat alternatives and the Thirty thousand people that are linked to the packing and transport of peat, could package and process peat alternatives. ...read more.

Many have been designated as Special Scientific Sites of Interest. (SSSI's) Peat bogs are over 4000 years old and contain clues about climate changes. Peat is an excellent preserver. Many artifacts have been found in bog lands the most important is that of the Tollund man, found in Denmark in 1952, he was a 2000 year old Germanic man perfectly preserved, he was wearing only a metal cap and belt with metal noose attached around his neck. Due to the natural beauty of peat bogs, tourism is created. Tourist on peat bogs include sites in Thorne, Hatfield and in Ireland the Marble arch caves. Peat extraction ruins the landscape driving away tourists. Because there is less peat to soak up water, the Water table rises flooding the Marble arch caves and eroding the rock, that can lead to parts of the caves collapsing. There is only 15% of Bog land in Ireland that remains Intact. Domestic and commercial extraction, The Horticulture industry, Pollution and Drainage has destroyed 85% of bog land. What's left is a springy wet marsh, known as Mire. 1 Steven Cairns 5Y ...read more.