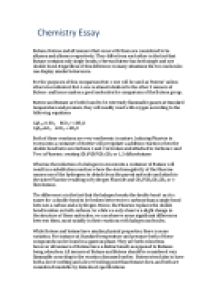 ﻿Chemistry Essay Butane, Butene and all isomers that come with them are considered to be alkanes and alkenes respectively. They differ from each other in the fact that Butane contains only single bonds, whereas Butene has both single and one double bond. Regardless of this difference in many situations the two molecules can display similar behaviours. For the purposes of this comparison But-1-ene will be used as ?Butene? unless otherwise indicated. But-1-ene is almost identical to the other 3 isomers of Butene and hence makes a good molecules for comparison of the Butene group. Butene and Butane are both found to be extremely flammable gasses at Standard temperature and pressure, they will readily react with ...read more.

result in a substitution reaction where the electronegativity of the Fluorine causes one of the hydrogens to detach from the parent molecule and attach to the sister Fluorine resulting in Hydrogen Fluoride and CH2FCH2CH2CH3 or 1-flurobutane. The difference is in the fact that the halogen breaks the double bond- as it is easier for a double bond to be broken between two carbons than a single bond between a carbon and a hydrogen. Hence, the Fluorine replaces the double bond location on both carbons. So while we only observe a slight change in the structure of these molecules, we can observe some significant differences between them, most notably in their reactions with halogen molecules. ...read more.

Butenes tend also to have both a lower melting and a lower boiling point than Butane does, and both are considered insoluble by data sheet specifications. Butenes, in-particular cis-2-butene and trans-2-butene, due to their flammable nature are used in the production of fuels. Butane however is used in Liquefied petroleum gas, and lighters as fuel. Another isomer of Butane, ?isobutane? or 2-methylpropane is commonly used as a cold refrigerant and should be avoided for use in hot applications such as cars. While we note many similarities between butane and butene we can also note many differences, such as their different reactions with halogens, and butene?s noticeable smell. These different properties, as demonstrated are enough to make butane and butene make them useful for different things. ...read more.