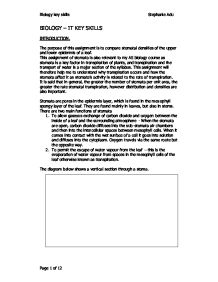 Compare stomatal densities of the upper and lower epidermis of a leaf.

BIOLOGY - IT KEY SKILLS INTRODUCTION. The purpose of this assignment is to compare stomatal densities of the upper and lower epidermis of a leaf. This assignment of stomata is also relevant to my AS biology course as stomata is a key factor in transpiration of plants, and transpiration and the transport of water is a major section of the syllabus. This assignment will therefore help me to understand why transpiration occurs and how the stomata affect it as stomata's activity is related to the rate of transpiration. It is said that in general, the greater the number of stomata per unit area, the greater the rate stomatal transpiration, however distribution and densities are also important. Stomata are pores in the epidermis layer, which is found in the mesophyll spongy layer of the leaf. They are found mainly in leaves, but also in stems. There are two main functions of stomata 1. To allow gaseous exchange of carbon dioxide and oxygen between the inside of a leaf and the surrounding atmosphere - When the stomata are open, carbon dioxide diffuses into the sub-stomata air chambers and then into the intercellular spaces between mesophyll cells. When it comes into contact with the wet surface of a cell it goes into solution and diffuses into the cytoplasm. Oxygen travels via the same route but the opposite way. 2. To permit the escape of water vapour from the leaf - this is the evaporation of water vapour from spaces in the mesophyll cells of the leaf otherwise known as transpiration. The diagram below shows a vertical section through a stoma. Each stoma is bordered with two semicircular guard cells whose movements due to changes in water content, control the size of the stomata by changes in their turgidity. If water is drawn into the guard cells by osmosis the cells expand and their turgidity is increased. ...read more.

This is usually easier if you focus your eye on the eyepiece scale and adjust the microscope so the stage comes into focus as well. 3. Move the stage micrometer carefully so that the starting units of the two scales. Note down the number of divisions along each of the two scales that this represents as these represents 1 division on the eyepiece scale. 4. The equation for this is: 1 division on the eyepiece scale = No. Of coincided divisions X No. of divisions on the scale micrometer scale X 10 Number of divisions on the eyepiece graticule scale At x100 and x400 magnification the lines on the scale will have a definite thickness. It is important to measure from one side of one scale mark to the same side of the next coinciding mark. All my procedures of stomata count were done on high power therefore 1 division on the eyepiece scale = 3.5 um. When you measure another specimen, you will already have the calibration figures so all you have to do is count how many eyepiece scale divisions your specimen covers, and multiply that by the calibration factor for tat objective lens. Method for determining stomatal density 1. Apply nail varnish onto a section of the leaf 2. Allow 2 minutes for nail varnish to dry and gently peel off varnish with twisters, bringing the varnish, which has an imprint of the surface of the leaf. Nail varnish was used instead of cello tape to gather an imprint because as the varnish is liquid it can mould and fill every space around the stomata on the surface, therefore creating an accurate and clear imprint to show. Cello tape might not fill every space therefore missing out stomata, which results in an incorrect perception of the stomata densities. 3. Place the peeled nail varnish onto a slide with the imprint side up, add 1 drop of water and apply cover slip on top. Then the stomata are ready to be calculated. ...read more.

it was hard to take an accurate measurement of anything underneath the microscope, also the scales can be badly and easily scratched making taking accurate measurements difficult. I would perform tests on leaves of which I know the name of so I can do background research of the leaf so I can make a precise prediction of stomata densities. Different people counted the number of stomata - an error could have occurred if someone did not know what stomata looked like or became subjective on if or they did not look in the same field of view. To try and overcome this error everyone was shown what stomata looked like before the investigation. Although magnification was kept constant someone may have adjusted it. When peeling the nail varnish, it was difficult to peel it off completely with the twisters and was a chance of mixing up slides. Another similar experiment, which could be carried out, is using cobalt thiocyanate. In the anhydrous state cobalt thiocyanate is blue, but when hydrated it turns pink. A piece of cobalt thiocyanate paper is placed on each side of a leaf and sandwiched between two glass slides clamped together, and then a stop watch is to measure the time it takes for the cobalt thiocyanate to go pink as this indicates that water has escaped out of the leaf which would be through the stomata. The time varies in which the colour change takes place depending on the temperature and humidity. Generally at room temperature the pink colour develops more rapidly on the lower epidermis of the leaf than upper surface, the reason being there are more stomata placed on the lower epidermis. Further investigations to do with the topic are to carry out tests on a greater variation of leaves, of different shapes, sizes, thickness and leaves (maybe dicot leaves) from different habitats to see what affect this would have on the densities of stomata on a leaf. Biology key skills Stephanie Adu Page 1 of 12 ...read more.