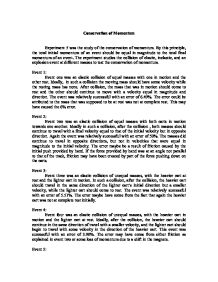 Conservation of Momentum Experiment 5 was the study of the conservation of momentum. By this principle, the total initial momentum of an event should be equal in magnitude to the total final momentum of an event. The experiment studies the collision of elastic, inelastic, and an explosion event at different masses to test the conservation of momentum. Event 1: Event one was an elastic collision of equal masses with one in motion and the other rest. Ideally, in such a collision the moving mass should have some velocity while the resting mass has none. After collision, the mass that was in motion should come to rest and the other should continue to move with a velocity equal in magnitude and direction. The event was relatively successful with an error of 6.49%. The error could be attributed to the mass that was supposed to be at rest was not at complete rest. This may have caused the 6% error. Event 2: Event two was an elastic collision of equal masses with both carts in motion towards one another. ...read more.

Event 9: Event nine was an explosion of unequal masses. Ideally the heavier mass should travel at a slower velocity than the lighter mass, both would travel in opposite directions. The data graph for this event was improperly done. In lab, the carts did exhibit proper mechanic as expected, however the actual quantitative values are not available. Event 10: Event ten was as inelastic collision of equal masses, both in motion. Ideally, after collision, both masses should come to rest or travel together in the direction of the mass with the larger velocity. Graphically and in practice, the event occurred as expected, however the error for the event was 191%. The cause of this may come from the data points selected to get the average velocity for cart 2 after the collision. Event 11: Event eleven was inelastic collision of unequal masses, both in motion. Ideally, after the collision, both masses should continue together to travel in the initial direction of the heavier cart, but with a slower velocity, or in the direction of the lighter cart if the lighter cart had sufficient velocity. Again graphically and in lab, the event occurred as predicted, however again, the initial values were not collected and a quantitative value is not available. ...read more.