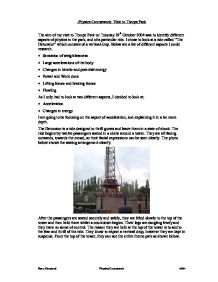 &quot;Conservatives are more concerned with the preservation of stability and order than with freedom&quot; Discuss

The aim of my visit to Thorpe Park on Tuesday 19th October 2004 was to identify different aspects of physics in the park, and of a particular ride. I chose to look at a ride called “The Detonator” which consists of a vertical drop. Below are a list of different aspects I could research.

As I only had to look at two different aspects, I decided to look at:

I am going to be focusing on the aspect of acceleration, and explaining it in a lot more depth.

The Detonator is a ride designed to thrill guests and leave them in a state of shock. The ride begins by twelve passengers seated in a circle around a tower. They are all facing outwards, towards the crowd, so their facial expressions can be seen clearly. The photo below shows the seating arrangement clearly. 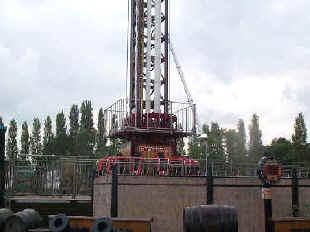 After the passengers are seated securely and safely, they are lifted slowly to the top of the tower and then held there whilst a countdown begins. Their legs are dangling freely and they have no sense of control. 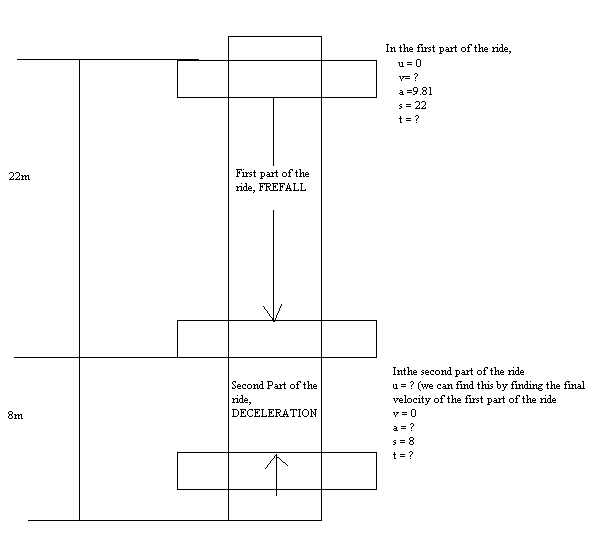 Now that we have both the initial velocity and the final velocity, we can calculate accurate readings for the time. We are going to rearrange the equation shown below in order to obtain our result.

Now I have fairly accurate readings, I am going to calculate the deceleration of the ride. This is after the vertical drop, when it has approached the braking point.

Rearranged formula to make ‘a’ the subject of the equation.

This value tells me the rate of deceleration of the ride after it has reached the braking point.

Looking at my calculations, I can see that the acceleration of the ride is –27.04ms-2

In order to gain a clearer insight into the concept of acceleration on the ride, we must study Newton’s Laws of motion.

Limitations of my investigation

After collecting my required data for this coursework, I had to take into account that the data was not 100% accurate. The acceleration, we assumed was 9.81. However we know that this is only true when ignoring air resistance. The acceleration would, of course be slightly less than 9.81. This is the main limitation.

Also, the masses I used were merely an estimate as the masses of people who got on the ride varied. However, this may not be a great problem as I am looking at the aspect of acceleration. According to Newton’s theories, all objects accelerate under gravity at the same rate, regardless of their mass.

Strengths of my investigation

The strengths of this coursework were that the distances were accurate as I asked the workers on the ride and I visited the official website to obtain such information.

Throughout this coursework, I used a number of sources in order to help me further my research. They are listed below.