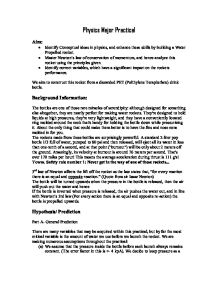 Physics Major Practical Aim: * Identify Conceptual ideas in physics, and enhance these skills by building a Water Propelled rocket. * Master Newton's law of conservation of momentum, and hence analyze this rocket using the principles given. * Identify correct variables, which have a significant impact on the rockets performance. We aim to construct this rocket from a discarded PET (Polthylene Teraphetlate) drink bottle. Background Information: The bottles are one of those rare miracles of serendipity: although designed for something else altogether, they are nearly perfect for making water rockets. They're designed to hold liquids at high pressures, they're very lightweight, and they have a conveniently located ring molded around the neck that's handy for holding the bottle down while pressurizing it. About the only thing that could make them better is to have the fins and nose cone molded in for you. The rockets made from these bottles are surprisingly powerful. A standard 2-liter pop bottle 1/3 full of water, pumped to 80 psi and then released, will eject all its water in less than one-tenth of a second, and at that point ("burnout") will be only about 2 meters off the ground. Amazingly, its velocity at burnout is around 76 meters per second. That's over 170 miles per hour! This means the average acceleration during thrust is 111 g's! Yowza. Safety rule number 1: Never get in the way of one of these rockets... ...read more.

None of the equipment was changed throughout the practical to keep a consistency. Method of Collection for Data: The method for collecting data includes several steps and these steps are described below: 1) After the equipment has been set properly. Fill the bottle with exactly 200 mL of water. Then set it on the launcher as shown in the diagram above. 2) Next you may start pumping. Please make sure the bottle is tilted at precisely a 45-degree angle. Now use 1 person in your group to record the pressure at which the bottle took off, and also have a person timing the time of flight of the bottle. Record the distance the rocket traveled - this is the horizontal range of the rocket. 3) The pressure you obtain from this first trial must be kept constant no matter what, so in some cases you may have to screw the lid slightly easily not tightly. 4) Perform the trial 3 times with 200mL and hence another 3 times each with water levels of 400mL and 600mL The results I obtained are shown in the table below 200 ml: Trial no: Initial air pressure in the bottle(kPa) Mass of the system (g) Weight of the system (N) Time (s) Maximum Horizontal displacement (m) 1 44 200 2000 3.23 22.8 2 45 200 2000 3.33 26.7 3 46 200 2000 3.01 21.3 Average 45.67 200 2000 3.16 23.6 400ml: Trial no: Initial air pressure in the bottle(kPa) ...read more.

(the error was small on the account of that there were variables which we could not control i.e. the wind speed- which was relatively strong that day) The causes of the error's we did obtain were probably from the wind speed or even human error. (We couldn't exactly get the person screwing on the cork to do it exactly* the same each time). The design of the rocket also turned out to be a success; it proved to show that we could get a more aerodynamic rocket by adding extra features such as the nozzle and straw's. If we were to do the experiment again the only thing we would try and improve were probably the weather conditions (i.e. do it on a calm day with virtually no wind). Other than that everything else went to plan, and we not only learnt and mastered a lot of physics concepts related to Newton's third law of motion we managed to actually have fun while doing an assignment. We not only learnt that you get maximum range with a 45 degree angle (proven theoretically) but our assumptions made in the beginning could of made results fairly inaccurate, but as it can be seen when we were comparing our experimental data to the theoretical data our error percentage was actually quite low. 1 IE the higher the pressure the farther the rocket will go ...read more.