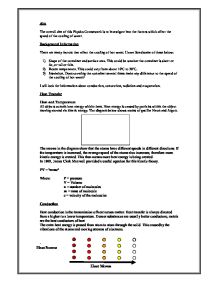 Aim The overall aim of this Physics Coursework is to investigate into the factors which affect the speed of the cooling of water. Background Information There are many factors that affect the cooling of hot water. I have listed some of these below: 1) Shape of the container and surface area. This could be weather the container is short or fat, or tall or thin. 2) Room temperature. This could vary from about 10�C to 30�C. 3) Insulation. Does covering the container several times make any difference to the speed of the cooling of hot water? I will look for information about conduction, convection, radiation and evaporation. Heat Transfer Heat and Temperature All objects contain heat energy within them. Heat energy is caused by particles within the object moving around via kinetic energy. The diagram below shows atoms of gas like Neon and Argon. The arrows in the diagram show that the atoms have different speeds in different directions. If the temperature is increased, the average speed of the atoms also increases, therefore more kinetic energy is created. This then means more heat energy is being created. In 1869, James Clerk Maxwell provided a useful equation for this kinetic theory. PV = ?nmc� Where: P = pressure V = Volume n = number of molecules m = mass of molecule c = velocity of the molecules Conduction Heat conduction is the transmission of heat across matter. ...read more.

I also predict that three polystyrene cups will retain more than in the other two situations. Furthermore, I believe the movement of the liquid will affect the cooling of hot water. I think that any hot liquid in cold liquid will rise to the top. This is due to convection. All liquids should be stirred to keep their temperatures steady. Experiment The aim of my experiment is to investigate into one factor which will affect the cooling of hot water. I have chosen to investigate: The insulation of the container: one cup thickness, two cup thickness and three cup thickness. Hypothesis I predict that the heat loss will decrease as the number of cups used increases. Therefore, I predict that the less polystyrene cups used, the faster it would be for the water to cool down. Apparatus :) 9 Polystyrene cups. 100cm� capacity :) Electric kettle to warm the water :) Stop watch- measuring seconds and minutes :) Three -10 to +110�C thermometers :) 100cm� measuring cylinder :) 3 lids made of plastic Diagram Fair Test I must make sure I carry out this experiment fairly. If not, I could end up with insufficient and unreliable results. To make this a fair test i am going to ensure that: :) The material of the cups are the same - all polystyrene :) The thickness of the polystyrene cups are the same :) ...read more.

The graph shows that the line for one polystyrene cup has a much steeper gradient than the line for 3 polystyrene cups. Therefore, my prediction for this experiment has been proved correct. Less heat was lost in 10 minutes as the number of polystyrene cups was increased. Both the graph and table are good ways of finding out the results for this experiment. they both clearly show a pattern between the number of cups and the heat loss. From lookin at the graph we can clearly see that the water gets cooled down quicker uing just one cup than using three cups, just by looking at the gradient. The formulas on the table also show this, but using numbers instead of using visual content such as the graph. Evaluation I think that my experiment was very successful as I obtained results which proved my hypothesis. This experiment was very time consuming as several repeats were necessary. However, I think I done them as well as I could do them. If I was able to spend more time on this experiment I would investigate further into factors which could affect the cooling of hot water such as the colour of the container, insulation like cotton wool and bubble wrap, and containers made of different materials such as glass and aluminium. Undertaking this experiment outside instead of inside the science classroom would make a difference to the cooling of the water. As there would be more wind and a cold atmosphere, the speed that the water cools down would increase. ...read more.