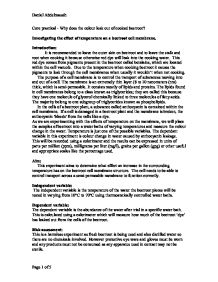 Core practical - Why does the colour leak out of cooked beetroot? Investigating the effect of temperature on a beetroot cell membrane.

Core practical - Why does the colour leak out of cooked beetroot? Investigating the effect of temperature on a beetroot cell membrane. Introduction: It is recommended to leave the outer skin on beetroot and to leave the stalk and root when cooking it because otherwise red dye will leak into the cooking water. This red dye comes from pigments present in the beetroot called betalains, which are located within the cell vacuole. Due to the temperature when cooking beetroot it causes the pigments to leak through the cell membranes when usually it wouldn't when not cooking. The purpose of a cell membrane is to control the transport of substances moving into and out of a cell. The membrane is an extremely thin layer (8 to 10 nanometers (nm) thick, which is semi-permeable. It consists mostly of lipids and proteins. The lipids found in cell membranes belong to a class known as triglycerides; they are called this because they have one molecule of glycerol chemically linked to three molecules of fatty acids. The majority belong to one subgroup of triglycerides known as phospholipids. In the cells of a beetroot plant, a substance called anthocyanin is contained within the cell membrane. If a cell is damaged in a beetroot plant and the membrane is broken, the anthocyanin 'bleeds' from the cells like a dye. ...read more.

The colorimeter uses a method to measure the concentration/intensity of the color that develops when a specific reagent is introduced to a solution containing a parameter which is the substance or chemical quantity that is to be measured. The tests evaluate how intense the color becomes and so the greater the intensity of color, the higher the parameter concentration. Visually comparing intensity and color concentration can be highly inaccurate because of individuals' abilities to identify color and see variations in the color. Also, having thermostatically controlled water baths would have been to a much greater advantage than using manually controlled beaker water baths as they are more accurate. This is because manually controlling the temperature of water and altering it to a certain degree is very difficult. If the temperature raised too high ice cubes were added to reduce the temperature, which reduced it too much so a flame was needed to heat it up a bit more. This wasn't really sufficient enough and so the electronically controlled water baths are a lot better. Firstly a beaker of distilled water is needed and 8 x 1cm3 of beetroot pieces cut using a size 4 cork borer. These pieces must now be left overnight so that any excess dye is washed away. Now fill 8 boiling tubes with 5cm3 of distilled water and place them into water baths of temperatures 0�C, 10�C, 20�C, 30�C, 40�C, 50�C, 60�C and 70�C. ...read more.

This reason exactly showing the need of all thermostatically controlled water baths so all results can be accurate and valid to each other. Many improvements can be made to make the experiment better and more accurate. It would have been beneficial to have repeated the experiment more times to make certain that the results were reliable and not gained through chance. The control experiment used was highly accurate, using distilled water, which is the clearest possible liquid, meant that even the slightest deviation in colour could be detected by the colorimeter. Controlling the variables in the experiment is not an easy task. The first problem is the size of the beetroot piece. The pieces could have a different surface area to one another. This obviously alters the effect of the experiment. The other difficult variable to maintain was the temperature of the heated water. With only basic equipment, keeping the water at the correct temperature was made a complicated task. If the experiment was to be repeated, the use of a proper controlled water baths may be a consideration, and also a template made for cutting the beetroot pieces. Using beetroot as the sample is not the only representation of cell membrane groups. Other cell membranes may have better or worse heat tolerance, some may not be affected at all, however, using a beetroot does give a good representation of the theories behind the cell membrane and how it behaves. Daniel Abdelmassih Page 1 of 5 ...read more.

This is a very good essay. The practical is well written up and clear and the writer includes a good evaluation of the experiment.

The essay could be enhanced by trying to expand on what is written to include some further explanation. Some slightly more scientific terminology could be included.