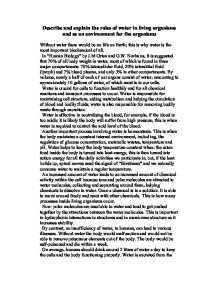 Describe and explain the roles of water in living organisms and as an environment for the organisms.

Describe and explain the roles of water in living organisms and as an environment for the organisms Without water there would be no life on Earth; this is why water is the most important biochemical of all. In "Human Biology" by J.M Orten and O.W. Nevhans, it is suggested that 70% of all body weight is water, most of which is found in three major compartments: 70% intracellular fluid, 20% interstitial fluid (lymph) and 7% blood plasma, and only 3% in other compartments. By volume, nearly a half of each of our organs consist of water; amounting to approximately 10 gallons of water, of which most is in our cells. Water is crucial for cells to function healthily and for all chemical reactions and transport processes to occur. ...read more.

An increased amount of water leads to an increased amount of chemical activity within the cell because ions and polar molecules are attracted to water molecules, collecting and separating around them, helping chemicals to dissolve in water. Once a chemical is in a solution. It is able to move around freely and react with other chemicals. This is how many processes inside living organisms occur. Non- polar molecules are insoluble in water and tend to get pushed together by the attractions between the water molecules. This is important in hydrophobic interactions in structures and in membrane structure as it increases stability. By contrast, an insufficiency of water, in humans, can lead to various illnesses. Without water the body would malfunction and would not be able to remove poisonous elements out of the body. ...read more.

It is believed that the original cells that began evolution on Earth about 3.5 billion years ago, began life in the sea, so all cells have an evolutionary heritage of living in water. Some living organisms spend their whole lives in water; they extract minerals from the water to maintain a balance of nourishment in their cells. The density of water decreases as it solidifies. This means that ice will float and act as an insulator for the liquid water below; hence, the living organisms below the water surface are protected. As the water temperature changes, so does the density; this creates currents that allow nutrients to circulate. The high cohesion between water molecules help organisms to settle on the water surface, this is true of the pond skater, allowing them to exploit their habitat. ...read more.