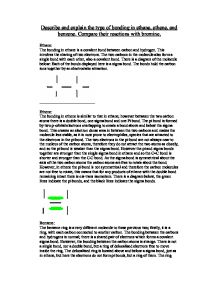 Describe and explain the type of bonding in ethane, ethene, and benzene. Compare their reactions with bromine.

Describe and explain the type of bonding in ethane, ethene, and benzene. Compare their reactions with bromine. Ethane: The bonding in ethane is a covalent bond between carbon and hydrogen. This involves the sharing of two electrons. The two carbons in the molecule also form a single bond with each other, also a covalent bond. There is a diagram of the molecule below: Each of the bonds displayed here is a sigma bond. The bonds hold the carbon ions together by an electrostatic attraction. Ethene: The bonding in ethene is similar to that in ethane; however between the two carbon atoms there is a double bond, one sigma bond and one Pi bond. The pi bond is formed by two p-orbital electrons overlapping to create a bond above and below the sigma bond. This creates an electron dense area in between the two carbons and makes the molecule less stable, as it is now prone to electrophiles, species that are attracted to the electrons in the pi bond. ...read more.

The bonding between the carbons and hydrogens is normal; there is a shared pair of electrons which forms a covalent sigma bond. However, the bonding between the carbon atoms is strange. There is not a single bond, nor a double bond, but a ring of delocalised electrons free to move inside the ring. The delocalised ring is located above and below a sigma bond, just as in ethene, but here the electrons do not form pi bonds, but a ring of them. The ring gives the benzene extra stability, which is unexpected as one would think that the high electron density would make it unstable like ethene. However as the electrons in the ring are free to move about and repel each other they are evenly spread over the entire molecule, creating a symmetrical and non-polar molecule. The lack of polarity also make is immiscible in water. The shape of the molecule allows it to pack tightly with other benzenes and is a liquid at room temp. ...read more.

The then positive bromine makes a bond with the carbon and the double bond is broken. This leaves a negative bromine ion and a carbocation. These are then attracted and the process is completed when this bromine forms a bond with the carbon. The reaction of bromine with benzene: C6H6 + Br2 -->C6H5Br + HBr The benzene is very unreactive and an iron catalyst is required for the reaction to proceed. This reaction is an example of electrophilic substitution. The catalyst acts as a halogen carrier accepts a lone pair from one of the halogen atoms and this makes one end of the halogen molecule positive, which then attacks the benzene ring. The electron ring is broken briefly and there is a bond formed between the bromine and the benzene ring. However, as the benzene ring is more stable with the delocalised electron ring intact the hydrogen is released as a positive ion which then forms a bond with the other bromine ion and leaves as HBr. ...read more.