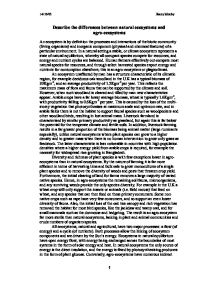 Describe the differences between natural ecosystems and agro-ecosystems

Describe the differences between natural ecosystems and agro-ecosystems An ecosystem is by definition the processes and interactions of the biotic community (living organisms) and inorganic component (physical and chemical features) of a particular environment. In a natural setting a stable, or climax ecosystem represents a state of natural equilibrium, whereby all occupant species compete for resources, and energy and nutrient cycles are balanced. Human farmers effectively out-compete most natural species for resources, and through select harvested species export energy and nutrients for consumption elsewhere; this is an agro-ecosystem or plagioclimax. An ecosystem unaffected by man has a structure characteristic of its climatic region, for example deciduous oak woodland in the U.K has a typical biomass of 30Kgm-2, and an average productivity of 1.2Kgm-2 per year. This reflects the maximum mass of flora and fauna that can be supported by the climate and soil. However, when such woodland is cleared and tilled by man new characteristics appear. Arable crops have a far lower average biomass, wheat is typically 1.6Kgm-2, with productivity falling to 0.6Kgm-2 per year. This is caused by the loss of the multi-storey vegetation that photosynthesises at maximum scale and optimum rate, and in arable fields there is not the habitat to support faunal species such as woodpeckers and other woodland birds, resulting in lost animal mass. Livestock farmland is characterised by similar primary productivity as grassland, but again this is far below the potential for the temperate climate and fertile soils. ...read more.

Not all farming methods require such drastic alterations to natural cycles, and shifting cultivators, nomadic pastoralists and hunter-gatherers use extensive agricultural techniques that mimic sustainable natural systems, and are successful in supporting small, low-density populations in places such as the Amazon rainforest and Papua New Guinea. Nonetheless, the majority of the human population relies upon intensive settled agriculture, and carefully controlled agro-ecosystems. The environmental impact of such reliance is significant, with even natural ecosystems experiencing feedback from the action of farmers. Examine the environmental impact of intensive farming Agriculture has had a widespread effect on every aspect of the environment, and since 1945 traditional agriculture in the U.K and in industrialised countries worldwide has become increasingly intensive. The means by which such reliable high yield crops, with no requirement for crop rotation are maintained is primarily through the application of a cocktail of agro-chemicals, and each chemical family has a range of impacts on the environment. Fertiliser use is possibly most significant, as the relative fertiliser use is much greater than any other artificial supplement to crops, and application has increased five-fold since 1930 due to the trend towards intensive productivist agriculture. The countryside around Saint-Brieve and the Gou�t basin in Brittany has been subject to severe negative effects of inorganic NPK overuse on vegetable cash crops since world war two. Runoff during rainfall is a major problem, with concentrations of nitrates and phosphates in the Gou�t River reaching very high levels. The high nitrate concentration especially has resulted in eutrophication in tributaries and slower moving waterways, with abnormally rapid algal growth. ...read more.

The result is a soil that may have a lower field capacity and be more susceptible to wind or water erosion. The rapid removal of nutrients, if exceeding the rate of nutrient replacement by fertilisers or farmyard manure can generally reduce soil fertility and hinder plant growth. The pressure of heavy tractors can compact and deform soil structures, and this is particularly pronounced with wet soils, when structural or particle bonding is weakest. Compaction in such a way reduces the size and amount of pore spaces in the soil, reducing aeration and drainage of the soil. This can cause high runoff and exasperate soil erosion in intensively farmed areas, and is a suggested cause for surface gulley erosion that is widespread in East Germany. Intensive industrial farming is also demanding of fuel, and farm processes contribute a significant amount to carbon dioxide emissions that may lead to global warming. It could, however, be argued that with the exponential growth of the human population intensive agriculture in the long-term reduces the rate at which new areas of land have to be cultivated, effectively reducing the need for extensification and environmental damage. However, the opposing argument suggests that if farming was not only extensified, but also made sustainable, then the positive ecological gain would outweigh the loss of some natural habitats. Technology has provided few suggestions as to how intensive productivist agriculture could be replaced, and the protest against GM crops is narrowing down current alternatives. The impact of modern farming on the environment is certainly damaging, but it provides a tangible and potentially successful solution to the worlds hunger. ?? ?? ?? ?? 14/10/05 Henry Munby 1 ...read more.