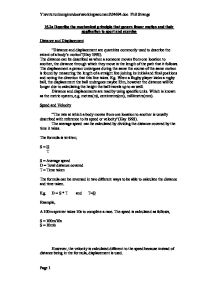 15.2a Describe the mechanical principle that govern linear motion and their application to sport and exercise

“Distance and displacement are quantities commonly used to describe the extent of a body’s motion”(Hay 1993).

The distance can be described as when a someone moves from one location to another, the distance through which they move is the length of the path that it follows. The displacement a person undergoes during the same the course of the same motion is found by measuring the length of a straight line joining its initial and final positions and noting the direction that this line takes. E.g. When a Rugby player kicks a rugby ball, the displacement the ball undergoes maybe 25m, however the distance will be longer due to calculating the height the ball travels up to as well.

Distance and displacements are read by using specific units. Which is known as the metric system, e.g. metres(m), centimetre(cm), millimetre(mm).

Acceleration can be calculated as the follows,

E.g. A 200m sprinter is running at a pace of 5m/s then accelerates to 10m/s during the last 50m of the race. The calculation can be made to work out the average acceleration of the athlete.

However the sprinters starting velocity is 0m/s at the start of the race.

Scalars concern elements such as distance and speed, those which can be described in terms of their length, which is known as there magnitude. Displacement, velocity and acceleration come under the vectors heading because, they require both a magnitude and a direction.

Arrows are often used on graphs to represent vectors because they can represent direction and length.

The magnitude of a vector is its size, e.g. 200 is larger than 100. Forceful elements such as pressure, weight, air resistance, friction, mass are all known as kinetic vector quantities. Any quantities without a magnitude and a direction can not be classed as a vector.

The coefficient of friction can be known as “The ratio of the force needed to overcome friction (Luttgens and Hamilton, 1997)

Friction can act as a negative force and may resist total performance improvement and can also harm.

Friction resists the relative motion between two surfaces within the body.

Friction can also act as a positive influence to improve performances.

Friction resists the motion in the direction of travel. The motion of the ball is affected in the positive direction.

Table tennis players can use friction to their benefit. They can hit the ball, by positioning the bat in various angles and at different speeds resulting in spinning the ball., e.g. top-spin, back-spin.