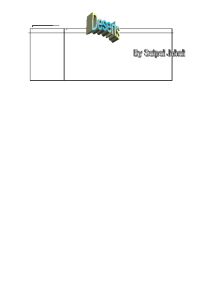 Desert, term applied to regions on the earth that are characterised by less than about 250mm of annual rainfall, and, in many cases an evaporation rate that exceeds precipitation, and a high average temperature. Because of the lack of moisture in the soil and the low humidity in the atmosphere, most of the sunlight penetrates to the ground. Daytime temperatures have reached 57.8 Degrees Celsius on the 13th of September 1922, this was the highest ever recorded in Libya. On the other hand at night the temperature can drop to near freezing. Deserts are found in ever continent throughout the globe from Africa to the cold plains of Northern China. Hot deserts extend all around the world in two belts, to the north and south of the tropical zone around the world's equator. Further from the equator, north and south are the cold deserts, and even further are the ice-covered polar deserts. Some deserts receive almost no rainfall, for example in southern Egypt, there are many years when rainfall is at an absolute zero. However when it does rain the downpour can be torrential. Thunderstorms quickly dampen the soil surface, then further water runs off the wet surface, creating flash-floods. ...read more.

When it rains, Cacti plants suck in huge amounts of water and swell up like huge balloons. The organ-pipe cactus, which grows 3 times taller than an average person, can hold up to 380 litres in its stem. This is enough to fill 6 standard bath tubs. This amount of water, can get the Cacti through 4 months of drought. Plants don't have to be large to be good at surviving through dry periods. For example, the wild tulips of the deserts of central Asia live through most of the year as small underground bulbs. When the spring rain comes, the bulbs quickly send up leaves and flowers. The bulbs store enough food and water to last until next spring. Preventing water loss Once a plant has built up a good store of water, it needs to prevent water loss. However no plant can avoid losing some water- it's a part of the way they keep themselves alive. All plants give off water vapour into the air. Most of the water vapour escapes through tiny pores (Holes) in the leaves, which plants have to keep open to survive. ...read more.

Some animals can break dry ground with their "Hooves", if they are horses to get some small amounts of water from the surface. Animals lose water when they urinate to get rid of the waste products in the body. To reduce water loss, camels and other desert animals have very concentrated urine. Surviving hot and cold Many deserts are very hot during the day, but at night the temperature can plummet to freezing. To avoid the heat during the days small animals shelter under rocks. Some animals only come out at night when it's cooler. Sometimes it gets too cold to go out at night, therefore animals like the Kangaroo rat come out of their shelters mainly at dawn and dusk, when the temperature is most comfortable. The western Diamondback has little pits under its eyes that can detect infrared radiation (Heat). This helps it see its prey, normally warm blooded rodents in the dark. Cold blooded animals, such as snakes don't need to keep their bodies at a steady temperature. They can spend most of their time cold and inactive using very little energy, because of this, reptiles can live with a tenth of the food mammals and birds need. This gives an advantage in deserts when food is scarce. ...read more.