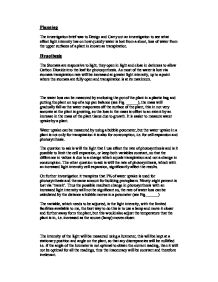 Design and Carry out an investigation to see what effect light intensity has on how quickly water is lost from a shoot, loss of water from the upper surfaces of a plant is known as transpiration.

Planning The investigation brief was to Design and Carry out an investigation to see what effect light intensity has on how quickly water is lost from a shoot, loss of water from the upper surfaces of a plant is known as transpiration. Hypothesis The Stomata are responsive to light, they open in light and close in darkness to allow Carbon Dioxide into the leaf for photosynthesis. As most of the water is lost via stomata transpiration rate will be increased at greater light intensity, up to a point where the stomata are fully open and transpiration is at its maximum. The water loss can be measured by enclosing the pot of the plant in a plastic bag and putting the plant on top of a top pan balance (see Fig ______), the mass will gradually fall as the water evaporates off the surface of the plant, this in not very accurate at the plant is growing, so the loss in the mass is offset to an extent by an increase in the mass of the plant tissue due to growth. It is easier to measure water uptake by a plant. Water uptake can be measured by using a bubble potometer, but the water uptake in a plant is not only for transpiration it is also for consumption, i.e. for cell expansion and photosynthesis. The question to ask is will the light that I use effect the rate of photosynthesis and is it possible to limit the cell expansion, or keep both variables constant, so that the difference in values is due to a change which equals transpiration and not a change in consumption. The other question to ask is will the rate of photosynthesis, which with an increased light intensity cell expansion, significantly affect the results. On further investigation it transpires that 1% of water uptake is used for photosynthesis and the same amount for building protoplasm. ...read more.

The apparatus must be secured with a clamp stand and kept off the edge of the table so it will not fall off if people brush past it. Measurements 1. I shall be taking measurements using a meter rule; any measurements will be recorded in centimetres. 2. I shall begin firstly with the bubble at the start position and measure the distance travelled and then move the bubble back to its original position, to ensure each measurement will be taken from the same point. 3. The measurements will be calculated to two decimal places. Precautions 1. I have repeated each experiment three times to be able to obtain a valid average from the set values. I also repeated it three times to make it easier for me to be aware of any analogous results. I used a light metre to measure the amount of lux that my lamp provided at different distances from the plant. I also considered the lux without shining the lamp. Obtaining valid resultants I measured the temperature in the room at the beginning of the experiment, which was ___. I also took great care in not leaving any windows open. However if a window had been left open I would leave it open during the experiment to make it fair so the humidity of the air would change due to the different weather conditions. I outlined in further detail about the precautions in my plan and tried to limit the effect of external factors. Results and Analysis With the restrictions of the apparatus it was only possible to get a maximum light intensity of 1340 lux. The table below shows the distance of the lamp from the plant. Distance From Plant (Cm) Light Intensity (Lux) No Lamp 470 40 750 20 850 10 1080 5 1190 2.0 1340 I tabulated my data so that it would be easier to view and also to be analysed. ...read more.

Some of the external factors which I had less control than I anticipated were a/c which although maintained a constant temperature also maintained and altered the air flow within the room. Also it was not until completing the experiment that I noticed that there was a tear in the rubber tubing of the potometer The reason why the results that I obtained did not seen to follow the trend is two fold, besides the reasons mentioned above. Both due to errors in the data collection and the two variables, being not as variable, (I am referring to the light intensity and to the time that the distance travelled was measured.) The range of the light intensity that was available to me did not allow a sufficient enough change in transpiration which would be accurately represented in the three minutes that I took as a measure of maximum time, taking into consideration the flaws of my particular measuring device. In other words I believe that the instruments that I was using were not sensitive enough to detect the change in transpiration, either because the rate did not significantly increase at that intensity or because the instruments were not maintained. The results given to me did show that at increasing light intensities there is an increase in transpiration. However there was one anomaly that I did not expect, that was that at 3950 lux there was an apparent reduction in the rate of transpiration, this can be because there was an error in the experiment at this level or because >>>>>>>>>>, either way it would be nice to see if this trend can be repeated. If I was to do the experiment again then there would be some added precautions I would take to try to obtain more accurate data. These included using instruments that are well maintained, checking thoroughly the instruments, having a higher wattage bulb allowing a greater range of light intensities, to increase the time that the uptake of water was measured for ie for about 10 minutes, as was done in the results that were given to me. ...read more.