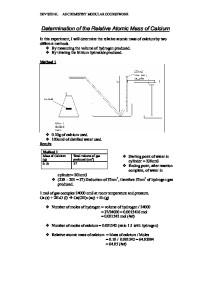 Determination of the Relative Atomic Mass of Calcium

If the gas syringe is used, it would give a percentage error of 1.35 % (0.5 / 37 * 100 = 1.3513). Where as the measuring cylinder gave a percentage error of 2.70 % (1 / 37 * 100 = 2.7027). This shows if the gas syringe is used it would reduce the gap for error. Another possible error is that the calcium could have been kept for so long that it might have oxidised when it was left out in the open. This would mean that less calcium would react and would have lowered the value of the gas produced. This would give a higher relative atomic mass when calculated. To prevent this, if the experiment is repeated, it can be made sure that the lid on the pot of calcium is always kept on and only taken off when it is needed. This would reduce the oxidising of the calcium. The reaction may have been stopped before it was completed. This would results in less gas being produced and this would make the relative atomic mass higher. Also there could have been a default in the equipment being used. There could have been leakage in the pipe, causing a certain amount of gas to escape into the atmosphere and not into the measuring cylinder. ...read more.

If too much hydrochloric acid had been let into the solution, the value recorded in the results would be higher therefore the average would come out higher and this would give a lower relative atomic mass. The weighing scale used measured to 2 decimal places. To make the results more accurate and reduce the percentage of error a weighing scale which measured to 3 decimal places could have been used. This aspect has already been discussed in the method 1 part of the evaluation. The experiment could also be carried out a higher number of times to get an more accurate average and more accurate relative atomic mass. The error with the oxidisation of the calcium could also apply to this method and has been discussed in the first part of the evaluation. In comparison method 2 is more accurate than method 1. This is because method 2 gave a relative atomic mass of 59.17 which is closer to the factual value of 40.1when compared to the value gained by method 1, 64.85. Also the accuracy can be linked to the percentage error as method one gave a higher percentage error than method two (method 1 = 61.72 %, method 2 = 49.56 %). Overall, both methods are very inaccurate (high percentage errors). But in comparison, method 2 is a better way of determining the relative atomic mass of calcium. DEV SEN 6L AS CHEMISTRY MODULAR COURSEWORK ...read more.