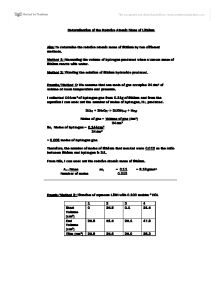 Determination of the Relative Atomic Mass of Lithium

The relative atomic mass of lithium is therefore The original mass Number of moles So, 0.11 0.01028 = 10.70gmol-1 Possible hazards of lithium and the lithium hydroxide solution are that it can irritate skin and also breathing lithium particles can irritate the nose and lungs. Therefore, I wore suitable clothing and eye protection. Evaluation This experiment was generally accurate and the two different RAMs of lithium worked out were reasonable however there were several possible errors that occurred/could have occurred. Procedural errors included that the lithium wasn't extremely pure as it corrodes almost instantly in the air and so already has a layer of oxygen on its surface before it is even placed into the water. This can add to the mass of the lithium and so affects the results. The lithium is originally stored in oil so I had to attempt to remove as much of this without allowing too much of an oxide layer from forming. ...read more.

0.20g of lithium and 200cm3 of water. A final possible source of error is in the indicator that was used; phenolphthalein. When adding the acid to the solution it is quite difficult to spot the precise end point of the experiment. To improve the experiment it would be good to ensure that the lithium was kept in an oxygen free environment; however this would be very difficult to carry out. Therefore, I think it would be better to just attempt to reduce the loss of gas. The best way would be to create an experiment where the two reactants could be reacted without the gas escaping. Also, using more of the reactants would allow more titrations to be carried out, which would let you do a wider average and would give more reliable results. Finally, measuring the lithium on a balance to a three decimal place number would minimise this source of error and would increase the reliability of the data. ...read more.