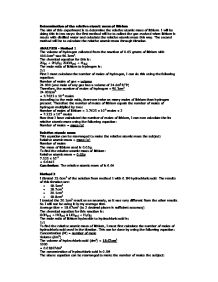 Determination of the relative atomic mass of lithium.

According to the percentage accuracies, Method 1 is more accurate than Method 2. There are a number of factors that could be responsible for the lower percentage accuracy of Method 2; error in measurement of the lithium or distilled water, misjudgement of water mark in the measuring tube, oxidation of the lithium. Also, I repeated Method 2 three times, allowing me to disregard anomalies and take an average. But, because I had to use the solution from Method 1 in Method 2, I did not repeat it. Any error in measuring the lithium or distilled water or fault in the lithium during Method 1 is likely to affect the results of Method 2. This means that ideally the solution from Method 1 would have an accuracy as near to 100% as possible. This could be done by repeating Method 1, at least three times, each time keeping the solution. Calculate the atomic mass from each volume of gas produced, the solution with the highest accuracy can then be used for Method 2. The calculation of the atomic mass of lithium from Method 2 would then be expected to produce the highest accuracy and most reliable result, according to the calculated percentage accuracies. Determination of the Relative Atomic Mass of Lithium - Planning Lithium (Li), chemical element of Group 1a in the periodic table, the alkali metal group, lightest of the solid elements. The metal itself -which is soft, white, and lustrous- and several of its alloys and compounds are produced on an industrial scale. Lithium reacts with water at room temperature to produce hydrogen gas and lithium hydroxide. ...read more.

* Some of the hydrogen produced would have dissolved into the water in the measuring cylinder thus the final amount of hydrogen collected would be lower than the actual amount. This source of inaccuracy can be reduced by using a different apparatus to measure the amount of gas produced like a syringe. Experiment 2 * I used the solution from experiment 1 thus all the inaccuracies from experiment 1 would contribute to the overall inaccuracy in experiment 2. This can be reduced by making experiment 1 as accurate as possible or by using accurate industry manufactured lithium hydroxide solution. * The hydrochloric acid I used was supposed to be a certain concentration. If however, its concentration wasn't exactly as we were informed, then this would introduce a big inaccuracy in my experiment. * Although the pipette is quite accurate, human error while measuring a specific amount of the solution from experiment 1 might make the reading inaccurate. This can be solved by practice on the part of the one carrying out the experiment. * Titration of the solutions is also prone to human error. Practice can reduce this error margin n so can repeating the titration several times to find an average, which should be more accurate than the individual results. While the lithium is stored, the surface will slowly react with air forming lithium oxide. This will have the effect of increasing the weight of the lithium because the relative atomic mass of oxygen is 16g mol-1, more than double that of lithium, 6.9g mol-1. Thus a lithium atom is much lighter than a lithium oxide molecule. ...read more.