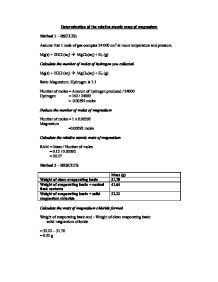 Determination of the relative atomic mass of magnesium.

Further Work If I was going to do further work I might use some different metals. I might also use different acid concentrations and different acids altogether. Also I might like to find the relative atomic mass of a metal using a more accurate method and achieve more accurate results. I would use the method of some kind of electrolysis. I feel that overall the results of my experiment were fairly accurate. I can test the accuracy by calculating the percentage of accuracy for each experiment. This is done by dividing the calculated result of the relative atomic mass by the actual atomic mass (24.1) of magnesium, then multiplying this by 100: Method 1: 20.27 / 24.1 x 100 = 84.1 % accurate Method 2: 20.27 / 24.1 x 100 = 84.1 % accurate This shows that my results have a high percentage of accuracy. There was however an anomalous result in the titration in Method 2. It was very different from the other results so, for accuracy I ignored the anomaly when calculating the average titre. This anomaly may have been caused by a number of factors. ...read more.

According to the percentage accuracies, Method 1 is more accurate than Method 2. There are a number of factors that could be responsible for the lower percentage accuracy of Method 2; error in measurement of the lithium or distilled water, misjudgement of water mark in the measuring tube, oxidation of the lithium. Also, I repeated Method 2 three times, allowing me to disreguard anomalies and take an average. But, because I had to use the solution from Method 1 in Method 2, I did not repeat it. Any error in measuring the lithium or distilled water or fault in the lithium during Method 1 is likely to affect the results of Method 2. This means that ideally the solution from Method 1 would have an accuracy as near to 100% as possible. This could be done by repeating Method 1, at least three times, each time keeping the solution. Calculate the atomic mass from each volume of gas produced, the solution with the highest accuracy can then be used for Method 2. The calculation of the atomic mass of lithium from Method 2 would then be expected to produce the highest accuracy and most reliable result, according to the calculated percentage accuracies. ...read more.