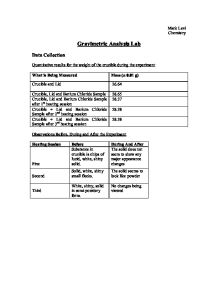 by the Molar mass of water = Number of moles of water removed from Barium Chloride] Consequently, the experimental ratio of Barium Chloride and Water in BaCl2.x H2O is 1:2. This is because when you divide each number of moles of water and barium chloride in the experiment by the smallest value - 0.01 it gives such a ratio From this ratio we can establish the X value in this formula. Hence, it would be 2 due to the fact that we gathered from the ratio that there are 2 hydrogen molecules for every Barium Chloride. Therefore the full equation for hydrated barium chloride is BaCl2.2 H2O. Conclusion From my research I have found out that the accepted value of hydrated barium chloride's formula is BaCl2.2 H2O. Moreover, the formula that I have determined from the experiment is also BaCl2.2 H2O, which means that I have successfully accomplished in getting near to the theoretical formula of hydrated barium chloride Evaluation Firstly, I would like to recognize two types of errors. First, the random errors: Random errors are unidentifiable and cannot be eliminated. The effect of random errors can be reduced by carrying out the investigation number of times. ...read more.

Thus strengthening the flame and using a pure blue flame might have helped make a more accurate experiment. Another systematic error would be how impurities in the barium chloride might have altered the results. The barium chloride might have been impure to start off with. A way of approaching this issue would be to buy the sample from a famous or well known brand. Finally, the last issue that I would like to indicate before ending this report is another major factor that have might influenced my results. A possible inaccuracy of this experiment could be a result of dust forming on the crucible during the heating process by the flame. In this scenario, I utilized the blue flame from the Bunsen burner, which is less dirty than the yellow flame. Nevertheless, if dirt formed on the crucible its mass would be changed, hence, making results imprecise. Another possible circumstance where dirt could have been transferred is from the tongs. While lifting the tong, some dirt might have spilled on the crucible; again, this would certainly affect the mass of the crucible. This error would have been eliminated if clean tongs were to be used. ...read more.