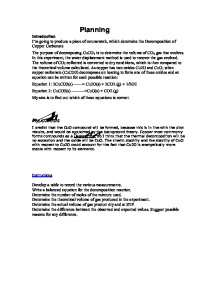 Determine the Decomposition of Copper Carbonate

Planning Introduction I'm going to produce a piece of coursework, which determine the Decomposition of Copper Carbonate The purpose of decomposing CuCO3 is to determine the volume of CO2 gas that evolves. In this experiment, the water displacement method is used to recover the gas evolved. The volume of CO2 collected is converted to dry conditions, which is then compared to the theoretical volume calculated. As copper has two oxides Cu2O and CuO, when copper carbonate (CuCO3) decomposes on heating to form one of these oxides and an equation can be written for each possible reaction: Equation 1: 2CuCO3(s) ------> Cu2O(s) + 2CO2 (g) + 1/2O2 Equation 2: CuCO3(s) --------->CuO(s) + CO2 (g) My aim is to find out which of these equations is correct. Hypothesis I predict that the CuO compound will be formed, because this is in line with the pilot results, and would be supported by the background theory. Copper most commonly forms compounds as a divalent ion, so I think that the thermal decomposition will be no exception and the oxide will be CuO. The kinetic stability and the stability of CuO with respect to Cu2O could account for the fact that Cu2O is energetically more stable with respect to its elements. ...read more.

Further information about the method? 1) This experiment requires measuring the temperature inside the boiling tube, which is difficult using standard laboratory equipment. 2) Instead a "control" experiment could be set up, in which no copper carbonate is used, but an empty boiling tube is heated for the same length of time, and the volume of the gas collected due to expansion of the air measured. This volume could then be subtracted from the volume obtained by the decomposition of the copper carbonate to give a more accurate result for the volume of gas given off. 3) It will be necessary to keep the size of the boiling tube constant because the extra volume given out by the expansion of the hot air will be different depending on the size of the test tube. 4) We should Use the same boiling tube and bung for each repeat. Calculations of results: 1. Write the balanced chemical equation for the decomposition of copper (II) carbonate. 2. Using Dalton's Law of Partial Pressures, determine the pressure of the carbon dioxide gas. 3. using mass to mole stoichiometry, determine the moles of carbon dioxide expected from this reaction. ...read more.