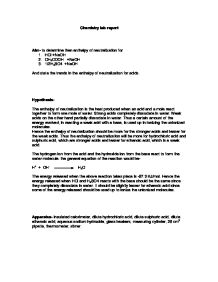 Determine the enthalpy of neutralization for HCl +NaOH, CH3COOH +NaOH, and 1/2H2SO4 +NaOH.

The literature value for the enthalpy of neutralization for sulphuric acid and hydrochloric acid should be the same that is -57.3 KJ/mol. Hence the percentage of error is 17% and 30% respectively. The error for the enthalpy of neutralization (literature value 50.1) is 5.18%. In fact it is expected that the enthalpy of neutralization is the least for the reaction with ethanoic acid but this was not so. It could be due to the following reasons * Some heat was lost to the surroundings due to which the final temperature was accurate. * The apparatus was not adequately stirred. * Since the reactions were quick it is possible that the thermometer was inserted after the reaction was over and thus the exact final temperature was not recorded. * It is also assumed that the acids would have the same density and specific heat capacity as that of water which is not so. Hence this could cause a shift in the values These errors could be minimized in the following ways * The heat loss could be minimized by carrying out the experiment in a closed chamber to minimize the heat loss * Care should be taken the apparatus was adequately stirred. ...read more.