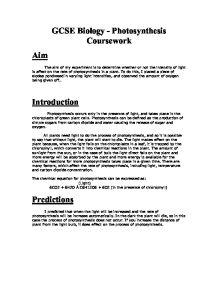 Determine whether or not the intensity of light is affect on the rate of photosynthesis in a plant.

GCSE Biology - Photosynthesis Coursework Aim The aim of my experiment is to determine whether or not the intensity of light is affect on the rate of photosynthesis in a plant. To do this, I placed a piece of elodea pondweed in varying light intensities, and observed the amount of oxygen being given off.. Introduction Photosynthesis occurs only in the presence of light, and takes place in the chloroplasts of green plant cells. Photosynthesis can be defined as the production of simple sugars from carbon dioxide and water causing the release of sugar and oxygen. All plants need light to do the process of photosynthesis, and so it is possible to say that without light, the plant will start to die. The light makes effect on the plant because, when the light falls on the chloroplasts in a leaf, it is trapped by the chlorophyll, which converts it into chemical reactions in the plant. The amount of sunlight from the sun, or in the case of bulb the light direct falls on the plant and more energy will be absorbed by the plant and more energy is available for the chemical reactions for more photosynthesis takes place in a given time. There are many factors, which affect the rate of photosynthesis, including light, temperature and carbon dioxide concentration. The chemical equation for photosynthesis can be expressed as: (Light) 6CO2 + 6H2O � C6H12O6 + 6O2 (in the presence of chlorophyll) Predictions I predicted that when the light will be increased and the rate of photosynthesis will be increase automatically. In the dark the plant will die, so in this case the process of photosynthesis does not occur. ...read more.