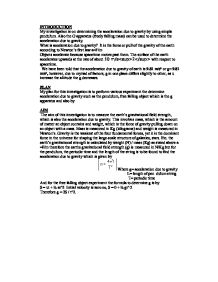 Determining the acceleration due to gravity by using simple pendulum.

What is acceleration due to gravity?  It is the force or pull of the gravity of the earth according to Newton’s first law a=F/m

Objects accelerate because spacetime moves past them. The surface of the earth accelerates upwards at the rate of about 10 m/s<sup>2</sup> with respect to spacetime.

We have been told that the acceleration due to gravity of earth is 9.81 m/s² or g= 9.81 m/s², however, due to myriad of factors, g in one place differs slightly to other, as u increase the altitude the g decreases.

My plan for this investigation is to perform various experiment the determine acceleration due to gravity such as the pendulum, free falling object which is the g apparatus and also by

The aim of this investigation is to measure the earth’s gravitational field strength, which is also the acceleration due to gravity. This involves mass, which is the amount of matter an object contains and weight, which is the force of gravity pulling down on an object with a mass. Mass is measured in Kg (kilograms) and weight is measured in Newton’s. Gravity is the weakest of the four fundamental forces, yet it is the dominant force in the universe for shaping the large-scale structure of galaxies, stars. Etc. the earth’s gravitational strength is calculated by weight (N) / mass (Kg) as stated above a =F/m therefore the earths gravitational field strength (g) 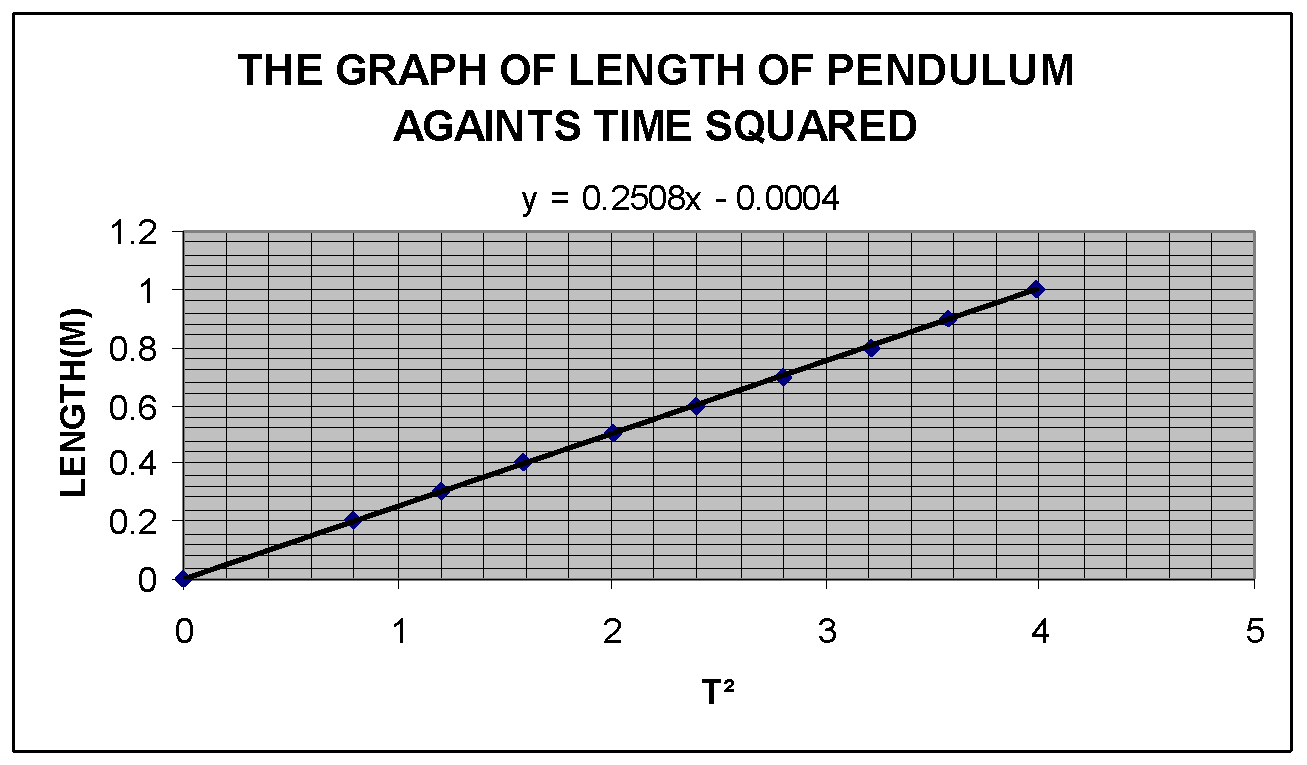 As can be seen the points plot into a straight line. A line of best fit was added to the chart as shown. The line can be sent to go through the origin as expected, it there is a tiny pendulum, it will have a tiny period and if there is an infinitely small pendulum, an infinitely small period. The gradient was calculated to be ¼ and this was inserted into the above equation to result in g=22π2¼. This equates to g=π2. As this is 9.8696 the experiment was remarkably accurate. The units of acceleration are ms-2 which agrees with the value above. It should be observed that the graph of length over time2 was plotted. The constants π and 2 have no units so have no effect

Actions taken to reduce the errors.

-Line eye up with fixed object for timing accuracy.

-Averaging twenty readings to improve accuracy b        Y factor of 20

My experiment of the free falling object method to determine the acceleration due to gravity was very simple and straightforward. To improve my experiment I could have repeated this experiment several times then I could get more accurate results, which could have taken more time out of my schedules. So time was one of the limiting factors. To improve my experiment even further I could have used modern instruments to improve and get more accurate results and also I could have used other falling object with different masses to see how the value of g varies according to their masses. I could have also used different lengths between the release mechanism and the receiver pad but measuring the distance greater than 1m was a problem because I used meter rulers to measure my lengths of the experiment this was another limiting factor that I had to overcome by taking lengths less and equal to 1m.