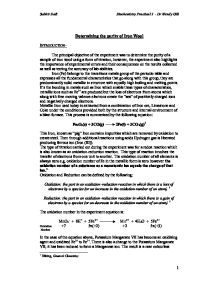 Determining the purity of Iron Wool.

Determining the purity of Iron Wool INTRODUCTION- The principal objective of the experiment was to determine the purity of a sample of iron wool using a form of titration, however, the experiment also highlights the importance of experimental errors and their consequences on the results collected as well as testing the accuracy of lab abilities. Iron (Fe) belongs to the transitions metals group of the periodic table and expresses all the fundamental characteristics that go along with this group, they are predominantly solid metallic in structure with equally high boiling and melting points. It's the bonding in metals such as Iron which enable these types of characteristics, metallic ions such as Fe2+ are produced but the loss of electrons from atoms which along with free moving valence electrons create the "sea" of positively charged ions and negatively charged electrons. Metallic Iron used today is extracted from a combination of Iron ore, Limestone and Coke under the conditions provided both by the structure and internal environment of a blast furnace. This process is summerised by the following equation: Fe2O3(s) + 3CO(g) 2Fe(l) + 3CO2(g)1 This Iron, known as "pig" Iron contains impurities which are removed by oxidation to create steel. Then through additional reactions using acids Hydrogen gas is liberated producing ferrous ion (Iron (III)). The type of titration carried out during the experiment was for a redox reaction which is also known as an oxidation-reduction reaction. This type of reaction involves the transfer of electrons from one unit to another. ...read more.

the iron wool remained after cooling to room temperature and indeed through out the titration the concentration of the solution would have been different than assumed if full dissolution occurred. This in turn would affect the amount of Potassium Manganate VII needed to reach equilibrium giving unreliable reading used in the final calculations. This could have been avoided if either by leaving the solution on the hotplate for a longer period of time or to increase the temperature of the hotplate because the collision theory tells us that when molecules, especially in substances in a liquid form, get more heat energy they move faster providing more useful collision with each other as a faster rate therefore possibly quicken the pace at which dissolution would have occurred. Also faults may lie in the using of the equipment, unnoticed bubbles may have collected in the pipette or burette giving false readings of how much iron solution was used or how much Potassium mangante VII solution was used. Interpretation of the "end point" may have caused errors. Correctly swirling the Iron solution while titrating would ensure the Potassium mangante molecules would correctly distribute around preventing a too sudden colour change to occur. BIBLIOGRAPHY * General Chemistry 5th edition- Ebbing, Houghton Mifflin Company 1996 * Chemistry matters-Hart. Richard, Oxford University Press 1978 * Chemistry in context 3rd edition- Hill, Graham et al, Thomas Nelson and Sons 1989 * Chemistry 1-Brian Ratcliff et al, Cambridge University Press 2000 * Calculations for A-level Chemistry 4th edition- Ramsden, E.N. ...read more.

It took 11.70cm-3 of hydrochloric acid to neutralise/equilibrate 25.0cm-3 of the sodium carbonate base in the presence of the weak acid indicator methyl orange. From these results along with a sequence of calculations it was found that for every molecule of sodium carbonate in a sodium carbonate crystal there is 10 molecules of water which gives the formula for sodium crystals, based on my experiment to be Na2Co310H2O. Within the crystal lattice of a sodium carbonate salt there are 5 water molecules surrounding every sodium ion (Na+) and because there are two ions present there are 10 water molecules present. This corresponds with the formula of sodium carbonate crystals given by Hart4 which means that my experiment was successful in that it produced readings which amounted to the correct value for x. In the background research it was stated that a fixed percentage of the crystal lattice of the salt is made up of water giving the water of crystallisation therefore from the calculation done the percentage of water molecules present can be worked out. I found this to be 90.9%. The variations in the experiments were kept to a minimum with the all base solutions for the three titrations deriving from the same stock solution and the same equipment i.e. burette and pipette we kept the same. As with most titration experiments possibly carrying out more than three titrations could increase the accuracy of the results further possibly making the ratio calculations closer to 10 than my own. ...read more.