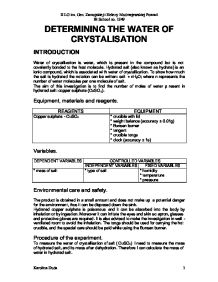 Determining the water of crystalisation

DETERMINING THE WATER OF CRYSTALISATION INTRODUCTION Water of crystallization is water, which is present in the compound but is not covalently bonded to the host molecule. Hydrated salt (also known as hydrate) is an ionic compound, which is associated with water of crystallization. To show how much the salt is hydrated the notation can be written: salt * nH2O; where n represents the number of water molecules per one molecule of salt. The aim of this investigation is to find the number of moles of water present in hydrated salt: copper sulphate (CuSO4). Equipment, materials and reagents. REAGENTS EQUIPMENT Copper sulphate - CuSO4 * crucible with lid * weight balance (accuracy ? 0.01g) * Bunsen burner * tangent * crucible tongs * clock (accuracy ? 1s) Variables. DEPENDENT VARIABLES CONTROLLED VARIABLES INDEPENDENT VARIABLES FIXED VARIABLES * mass of salt * type of salt * humidity * temperature * pressure Environmental care and safety. The product is obtained in a small amount and does not make up a potential danger for the environment, thus it can be disposed down the sink. Hydrated copper sulphate is poisonous and it can be absorbed into the body by inhalation or by ingestion. Moreover it can irritate the eyes and skin so apron, glasses and protective gloves are required. It is also advised to make the investigation in well-ventilated room to avoid the inhalation. ...read more.

Improving the investigation. As I mentioned before, there are some things, which can be improved while doing this type of experiment. The most important thing it to know the source of salt and its purity. Apart from that there is another method for determining the water of crystallisation present in salts called Thermal Gravimetric Analysis (TGA), which seems to be more precise and appropriate for all salts. Thermogravimetric Analysis or TGA is a type of testing that is performed on samples to determine changes in weight in relation to change in temperature. Such analysis relies on a high degree of precision in three measurements: weight, temperature, and temperature change. TGA is commonly employed in research and testing to determine characteristics of materials such as polymers, to determine degradation temperatures, absorbed moisture content of materials, the level of inorganic and organic components in materials, decomposition points of explosives, and solvent residues. It is also often used to estimate the corrosion kinetics in high temperature oxidation The analyzer usually consists of a high-precision balance with a pan loaded with the sample. The sample is placed in a small electrically heated oven with a thermocouple to accurately measure the temperature. The atmosphere may be purged with an inert gas to prevent oxidation or other undesired reactions. A computer is used to control the instrument. Analysis is carried out by raising the temperature gradually and plotting weight against temperature. After the data is obtained, curve smoothing and other operations may be done such as to find the exact points of inflection. [1]. ...read more.