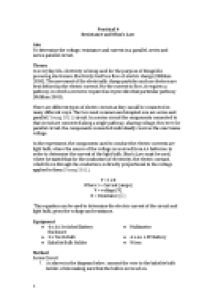 Determining Voltage, Resistance and Current in a Parallel, Series and Series-Parallel Circuit.

To determine the voltage, resistance and current in a parallel, series and series-parallel circuit.

In everyday life, electricity is being used for the purpose of things like powering electronics. Electricity itself is a flow of electric charge (Millikan 2000). The movement of the electrically charge particles such as electron are best defined as the electric current. For the current to flow, it requires a pathway, in which a circuit is required as it provides that particular pathway (Millikan 2000).

In the experiment, the components used to conduct the electric currents are light bulb, where the source of the voltage is received from AA batteries. In order to determine the current of the light bulb, Ohm’s Law must be

Calculating the Current of Bulb 1 and bulb 2

From following the method, it was found that when a series-circuit is used the bulbs share the voltage from the power supply, however when a parallel circuit was used, the bulb receives nearly full voltage from the power supply. It was also observed that the bulb shines brighter in the parallel circuits, which also gives indication that more voltage is flowing to the bulb. Nevertheless there were errors involved during the practical, which caused some calculated, and measurement values to have a less level of accuracy. An improvement was suggested which would increase the possibility of observing a more accurate data.