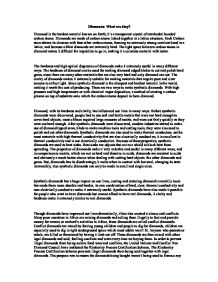 Diamonds: What are they?

Diamonds: What are they?

Diamond is the hardest material known on Earth; it’s a transparent crystal of tetrahedral bonded carbon atoms. Diamonds are made of carbon atoms linked together in a lattice structure. Each Carbon atom shares its electron with four other carbon atoms, forming an extremely strong covalent bond in a lattice, and because of that diamonds are extremely hard. The tight space between carbon atoms in diamond makes it difficult for impurities to go in, making it a colorless material with luster.

The hardness and high optical dispersion of diamonds make it extremely useful in many different ways. The hardness of diamond can be used for making diamond edged blades to cut and polish hard gems, since there are many other materials that are also very hard and only diamond can cut. The clarity of diamonds makes it extremely suitable for making materials that require pure and clear screens to reflect light. Since synthetic diamond is the cheapest and hardest material in the world, making it worth the cost of producing. There are two ways to make synthetic diamonds. With high pressure and high temperature or with chemical vapor deposition, a method of creating a carbon plasma on top of substrate onto which the carbon atoms deposit to form diamond.

Diamond, with its hardness and clarity, has influenced our lives in many ways. Before synthetic diamonds were discovered, people had to use soft and brittle metals that were not hard enough to carve hard objects, most of them required large amounts of metals, and wore out fairly quickly as they were not hard enough. After synthetic diamonds were discovered, modern industries started to make use of diamond tipped saws, blade to make machine tools and cutting tools, they were also used to polish and cut other diamonds. Synthetic diamonds are also used to make thermal conductors, unlike most materials with high thermal conductivity that are also electrically conductive; it is excellent in thermal conductivity and is not electrically conductive. Because of these properties, synthetic diamonds are used as heat sinks. Heat sinks are objects that act as a shield to block heat from spreading. The properties of diamonds make it very valuable and useful in many different areas, and in comparison to metals, which are not as hard and dissolve in acids, diamonds are resistant to acids and obviously a much better choice when dealing with cutting hard objects like other diamonds and gems. But, diamonds has its disadvantage; it melts when in contact with hot steel, changing its state irreversibly, also synthetic diamonds can only be made in small and single sizes.

Synthetic diamonds has a huge impact on our lives, coating and sintering diamond to metallic tools has made them more durable and harder, its rare combination of hard, clear, thermal conductivity and non-electrically conductive make it extremely useful. Synthetic diamonds have also made it possible for people who want to have diamonds but cannot afford to have real diamonds, it clarity and hardness make it extremely similar to real diamonds.

Though diamonds have improved our lives dramatically, it has also created violence and conflicts. Many poor countries in Africa are mining diamonds and selling them illegally to fuel and provide money for armies or warlord’s activities in Africa, these diamonds are called conflict diamonds. Conflict diamonds are mined by forcing young children and people to dig for diamonds, children are especially used to dig in tight underground space which most adults won’t fit. Anyone who protests or rebels, are killed or threatened by having a limb cut off. These diamonds are then mixed with other legal diamonds and sold, fuelling conflicts and wars every time we buying them. In order to prevent illegal diamonds from being sold to fund wars and conflicts, the United Nations and Conflict Free Diamond Council have instituted the Kimberley Process Certification Scheme. The Kimberley Process Certification Scheme prevents illegal diamonds from being sold together with legal diamonds. The purpose was to assure the diamonds being bought weren’t being used to finance any violent or abusive activities. From this we can see how valuable diamonds were and how much they were worth.