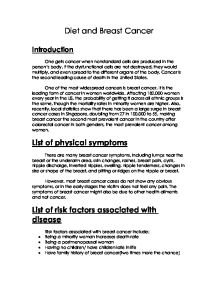 One gets cancer when nonstandard cells are produced in the person’s body. If the dysfunctional cells are not destroyed, they would multiply, and even spread to the different organs of the body. Cancer is the second leading cause of death in the United States.

One of the most widespread cancers is breast cancer. It is the leading form of cancer in women worldwide. Affecting 182,000 women every year in the US, the probability of getting it across all ethnic groups is the same, though the mortality rates in minority women are higher. Also, recently, local statistics show that there has been a large surge in breast cancer cases in Singapore, doubling from 27 in 100,000 to 55, making breast cancer the second most prevalent cancer in the country after colorectal cancer in both genders, the most prevalent cancer among women.

There are many breast cancer symptoms, including lumps near the breast or the underarm area, skin changes, rashes, breast pain, cysts, nipple discharge, inverted nipples, swelling, nipple tenderness, changes in size or shape of the breast, and pitting or ridges on the nipple or breast.

However, most breast cancer cases do not show any obvious symptoms, or in the early stages the victim does not feel any pain. The symptoms of breast cancer might also be due to other health aliments and not cancer.